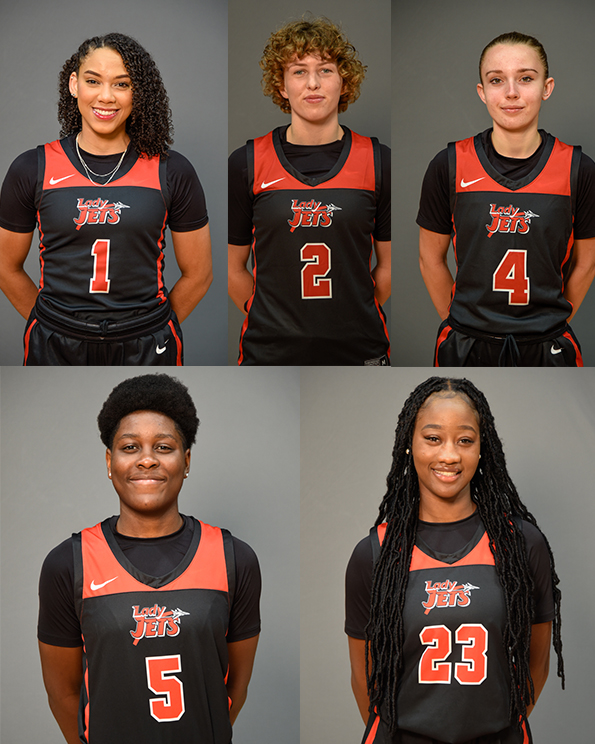 Shown above are the five Lady Jets featured individually in the NJCAA rankings for their individual efforts. They include: (1) Luana Leite, (2) Loes Rozing, (4) Veronika Palfi, (5) Alexia Dizeko and (23) Fanta Gassama. Photo by SGTC Athletics

AMERICUS – The South Georgia Technical College Lady Jets remained in the first-place position in the National Junior College Athletic Association’s (NJCAA) Division I women’s basketball poll released this week. This is the second consecutive week the Lady Jets have earned this honor. It is the only time an SGTC men’s or women’s basketball team has received the top ranking.

The Lady Jets captured a conference win this week and stretched their winning streak to 21 consecutive games. They are currently 21 – 1 on the season with the only loss coming during their first game of the season against Gulf Coast, 76 – 61.  Gulf Coast had been the top-ranked team prior to a loss and now they have dropped into 8th place.

“Again, this is a tremendous honor for our program and for our players,” said South Georgia Technical College Athletic Director and Lady Jets head coach James Frey.  “When you are in the number one position, you are only one loss away from ‘they used to be number one.’  Our job now is to stay focused, play good basketball and keep winning.”

South Georgia Technical College is still the only Georgia College ranked in the NJCAA Top 25 poll but East Georgia State College had earned an honorable mention before they dropped an 82 – 63 decision to Georgia Highlands last week.  East Georgia rebounded with a 104 – 71 victory over Denmark Tech on Monday.  The Lady Jets will travel to Swainsboro on January 28th for a conference game with East Georgia.  The Lady Jets defeated East Georgia in Americus 86 – 74 December 9th.

In addition to the 1st place ranking in the national poll, the SGTC Lady Jets also had five players to be recognized for their individual efforts on the court.   The five Lady Jets featured in the national rankings include: sophomore center Fanta Gassama, sophomore Loes Rozing, sophomore Alexia Dizeko, sophomore Luana Leite and freshman guard Veronika Palfi.

Sophomore point guard Loes Rozing, 5’ 10” from Heiloo, Netherlands is the other Lady Jet ranked and she is currently 27th in assists per game averaging 4.6.

The Lady Jets will travel to Denmark Tech on January 25th and Swainsboro to face East Georgia on January 28th.  The Lady Jets next home game will be on February 1st against Central Georgia Tech at 5:30 p.m. as part of a double-header with the Jets and Andrew College at 7:30 p.m.

The Jets will travel to Georgia Highlands on Saturday, January 28th before returning home for the double-header on Wednesday, February 1st.