From the Archives: Taking a journey through the Southland Raiders’ historic 1986 football season; part 6 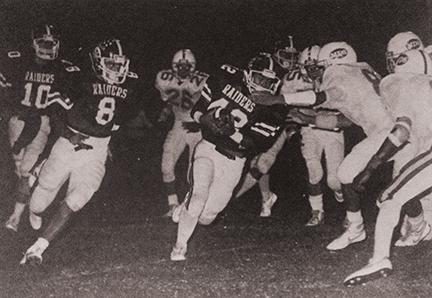 From the 1987 Southland Academy yearbook: Southland’s Paul Kim (43) rushes through several Mt. DeSales defenders during the Raiders’ Nov. 14, 1986 playoff contest against the Cavaliers. 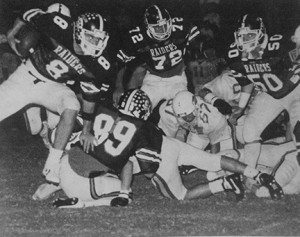 From the 1987 Southland Academy yearbook:
Southland’s David Roach (8) carries the ball around a series of Mt. DeSales defenders as his teammates provide protection during the Raiders’ Nov. 14, 1986 playoff contest against the Cavaliers.

On Nov. 20, 1986, in anticipation of the upcoming second round of the state playoffs, Evans wrote in his “This Week’s Picks” column, “…Southland Academy is playing well, as is Savannah Christian. However, the defense has been there for the Raiders all season long and that will be the key in a Raider semifinal victory over Savannah Christian by 14; 21-7.
Evans was a little closer in his prediction this time around, as evidenced by an article following the match-up by ATR special writer, Karen Crouse titled, “Raiders defeat Red Raiders”.
The text of this article is shared below:
Raiders   defeat Red Raiders
By KAREN CROUSE
Special to the T-R

“SAVANNAH, Ga. – The Southland Academy Raiders took a giant step towards a first-ever state football championship by downing host, Savannah Christian 13-0 in the semifinals of the Georgia Independent School Association Class AAA playoffs here Friday night.
“The Raiders, 11-1, will now take on Westfield, which defeated Stratford Academy 6-3 in overtime, in Perry next Friday for the title. Savannah Christian, which the Raiders beat 37-12 in the first game of the season in Americus, ends the season at 9-3.
“For senior tailback, Chan Reeves, who gained 91 yards to pace Southland, it was a sweet victory indeed. ‘They beat us my sophomore year in the state championship game and we remembered,’ he said.
“‘But we made some mistakes we don’t usually make in the second half and it kept Savannah Christian in the game. I wasn’t sure of the game until I saw zero-zero-zero on the scoreboard and we were ahead.’
“Southland, which rushed for 250 yards, scored first in the opening period with Reeves scoring from three yards out. Ray Clark added the extra point. The final score of the game came on a 12-yard run by Reeves in the second quarter.
“‘That was a good game for me,’ said Reeves, who had 56 yards at the half. ‘But it wasn’t my best one.’
“McCichael also pointed out the play of the defense. ‘They played super tonight,’ he said. ‘They bent but they didn’t break.’
“Savannah Christian wound up with 265 total yards; 188 by rushing and 77 by passing.”
—————————–
Just like that, the Raiders had secured themselves a spot in the championship game. The team immediately began their preparations for the big day, as McMichael and the players studied their opponents, looking for any way to gain an advantage and help secure a Southland victory.
The day before the team’s final tilt of the season, scheduled for Nov. 28, 1986, Evans penned a preview of the upcoming match-up titled, “Raiders will have its hands full of Hornets”.
The text of this article is shared below:
By RON EVANS
Sports Editor
“The Southland Academy Raiders will have their hands full Friday night as they take on the Westfield Hornets for the Georgia Independent Schools Association Class AAA football championship.
“‘I really feel that the two best teams in the state are here,’ said Raider defensive coordinator, Don Marchman.
“Westfield, the Region 1-AAA champions, are led by Brad Bolton, a six foot two, 190-pound senior fullback who has rushed for 778 yards on 123 carries and 10 touchdowns. ‘He is the key to their offense,’ said Marchman. ‘The first thing we have to do is take him out of the game. He runs hard.’
“‘Westfield runs the Veer and Bolton is the main man. They will run a fullback trap and then try the inside and outside Veer,’ said Marchman.
“Another possible thorn in the side of the Raiders is junior quarterback, Joey Brett, who has connected on 49 passes on 102 attempts for eight touchdowns and just four interceptions and rushed for 393 yards on 91 totes and 20 touchdowns. ‘He is an action passer. He’ll be the best passer we’ll face,’ said Marchman.
“The key for Southland stopping the Westfield Veer will fall on ends, Phil Hart and Ken Greene. ‘The fullback sets up the option and if Brett pulls the ball out and turns the corner, he’s gone,’ said Marchman.
“‘This game is like Savannah Christian, whom the Raiders defeated last Friday in the semifinal contest. It’s like sitting on a powder keg. They are ready to explode and score a lot of points,’ said Marchman.
“Marchman said he feels that the big difference between Savannah Christian and Westfield is that the Hornets have a better passer.
“Westfield defeated Stratford 6-3 in overtime last Friday to qualify for their first ever appearance at a state final.”
—————————–
Be sure to join us next week as we conclude our series on the Southland Raiders’ epic 1986 football team and their rise to the top spot in the state. When we resume, we will be sharing the ATR’s detailed coverage of the Raiders’ victory over the Westfield Hornets, as well as more photos and other writings about the team’s journey to the school’s first ever gridiron championship.