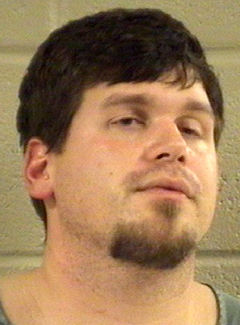 A Georgia man was arrested after police say he fired shots at a hotel room while possibly under the influence of pills.

The Dalton Daily Citizen reports Matthew Steven Thomas, 32, of Rocky Face, Ga., was arrested Saturday morning at the Baymont Inn on Chattanooga Road near the Tennessee state line after someone called 911 and said he was firing a shotgun at the hotel.

According to Bruce Frazier, a spokesman for the nearby Dalton Police Department, Thomas thought his wife was in the room next to his cheating on him. Frazier said Thomas fired a shotgun at the door to knock off the door knob. He added that Thomas tried to use a claw hammer to pry the door open, but there was a fire wall behind it because the rooms no longer adjoined. He then fired shots through the window of the adjoining room, which was empty.

Nobody was injured, Frazier said.

Frazier said 30 minutes prior to that incident, police were dispatched to the hotel because Thomas thought he heard his wife screaming in the next room and believed she was being attacked. The hotel manager opened up the room to show that it was empty.

According to an incident report, when police arrived the second time, they ordered Thomas several times to come out with his hands up, but he kept going in and out of his hotel room. Thomas finally came out a fourth time with his hands up and was arrested.

While searching Thomas, police found a bottle of pills and several shotgun shells, according to the report.

Thomas is charged with criminal damage to property, reckless conduct, possession of a sawed-off gun or other dangerous weapon, discharging a firearm on the property of another, possession of a firearm during the commission of a felony and willful obstruction of officers.

As of Tuesday morning, Thomas was the Whitfield County Jail awaiting a bond hearing.