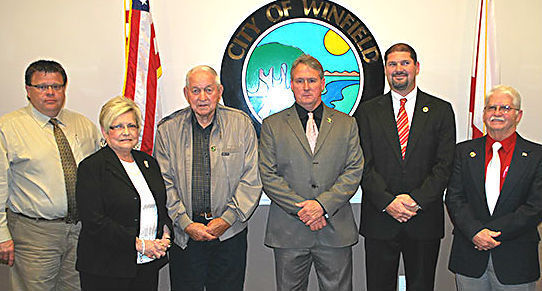 In December, Price spearheaded the adoption of a resolution that in its first line officially declared that God literally owned Winfield.

“Whereas we acknowledge God is the owner of the City of Winfield and that it is a City under God. We acknowledge that at all times, He is in control,” the resolution reads.

Adopting the resolution was the Winfield City Council’s last official act of 2014, and the small town has spent the first week of 2015 in the headlines because of it.

“It blew up on Facebook last night after the atheists got a hold of it,” Price told al.com Tuesday.

An incredulous Jan. 5 post on the blog The Friendly Atheist questioned whether the Constitution allowed God to own Winfield.

“I promise you God has better things to do than take over your city,” wrote blogger Hermant Mehta, who said he had notified the Freedom From Religion Foundation about the resolution.

The Freedom From Religion Foundation is the same organization whose protest of a nativity scene at a government building in Rainbow City, Alabama in December prompted a public backlash from the town’s Christian residents, and was met with resistance from the city’s attorney.

Price, who has a large Ten Commandments monument on display in the entrance of the wrecker service business he owns, appears to be equally defiant to criticism. He believes that claiming that God owns Winfield is simply expressing the religious sentiment of the Pledge of Allegiance at the municipal level.

“I feel like we need to stand up for what is right,” he told al.com. “Our forefathers said ‘One nation under God’ and we went so far away from that. There are not enough godly people involved in day-to-day decisions.”

To those that say the resolution constitutes an endorsement of Christianity, and a rejection of other religions, Price says it doesn’t.

“I’m going to step on a lot of people’s toes but there’s not but one God and, that one God, to Him be the glory,” he said.

“There are a lot of religions out there but only one God.”