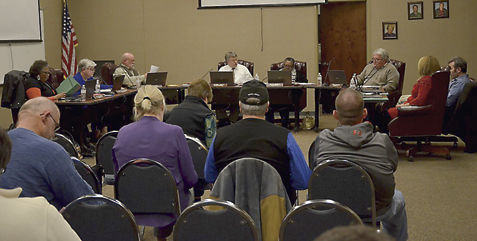 AMERICUS — In its first work session of 2015, on Tuesday, the Sumter County Board of Education discussed many important matters, most of which will be voted on at the regular monthly meeting that was scheduled for Thursday.

The Board will elect a chair and vice chair as its first order of business Thursday. The Board now consists of four incumbents and three new members. The new members are Jim Reid, District 3; Rick Barnes, District 4; and Sylvia Roland, at large.

The system’s attorney and legal organ will also be selected Thursday.

Sumter County Schools Superintendent Donnie Smith said he wants to keep the current legal firm, Jones, Cork and Miller of Macon because, not only are they nearby, they are doing a good job. He said there are also several cases the firm is involved with now such as special education cases and a wrongful termination case that need consistency.

Board member Reid asked why the Board stopped using Harben, Hartley and Hawkins (HHH) of Gainesville, a firm that specializes in public education law. While no one could actually answer that question at the work session, the Times-Recorder’s archives reveal that in February 2012, after Jimmy Skipper had resigned as Board attorney because the Board refused to take his advice regarding the redistricting plan, it was suggested that Albany attorney Maurice King be the local attorney while HHH remain to represent the Board with “school matters.” That motion was voted down 5-4 and King was hired while Harben, Hartley and Hawkins was let go. Voting for the motion were Krenson along with Board members Carolyn Whitehead, Mike Busman and Mike Mock. Voting to keep King as Harben, Hartley and Hawkins’ replacement were Board members Kelvin Pless, Michael Lewis, Alice Green, Willa Fitzpatrick and Board Chair Edith Ann Green.

Reid commented that with everything digital these days, distance is really not a problem. Barnes commented, “Don’t bring me one and say this is it. A single source is scary to me. Let’s look at this one and HHH.”

Busman suggested that Smith get the profiles of the five firms they looked at several months ago after hiring Jones, Cork and Miller, and letting the new Board members review prior to making a decision.

The superintendent brought forward a new reconfiguration plan to be implemented for the 2015-2016 school year, after it is refined and approved by the Board. Smith said he had brought this before the Board well over a year ago in “various forms” but that since becoming a combined district in 1994, the system still operates as “two systems, city and county.”

“We now have segregated schools,” he told the Board. “The city is predominately minority student population while the county is a lot more diverse.”

Smith commended the Crisp County School System, without actually naming it, for the good job it has done with reconfiguration and growth.

The proposal discussed Tuesday consists of the following:

Smith stressed that this would be a temporary situation because after a new school is built, only one building will be closed and grades 9-12 will be in the new facility. He said he wants the Board to vote on the reconfiguration in February.

He said the cost of transportation should not increase under the new plan and only moving costs will be incurred. He added that Staley would probably be used to house the alternative school or for some other use after the new school is built. Voters are expected to go to the polls and vote on an ESPLOST to build the school in a special election in March.

Reid asked when the school calendar is set. Smith said February or March. Reid said he and other citizens see school buses all over the county from 5 a.m. until 10 or 11 at night, some carrying only three or four passengers. He wanted to know why.

Smith said some programs, such as the ombudsman program and special education, run on different schedules than the regular school schedules.

Reid said he is opposed to half-days for professional development because of the transportation costs, while Smith explained that half-days are necessary because of they “can only pay teachers for so many days.”

Reid also said he’s in favor of starting school after Labor Day to save air conditioning the schools in July and August. He complimented the Webster County School System for having classes 140 days each year, with each day being an hour longer.

Another item to be on the agenda Thursday was to be the Furlow Charter School proposed site.