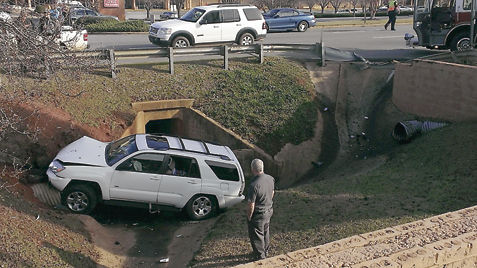 AMERICUS — A driver drove his SUV through a guardrail and ended in a drainage ditch.

According to the accident report from the Americus Police Department, the accident occurred shortly after 9:30 a.m. Monday on East Lamar Street at Manhattan Street. Two witnesses said they saw the driver, Jason C. Cribbs, 45, of Bloomington, driving a 2004 Toyota 4 Runner SUV, go through the guard rail, landing at the bottom of a drainage ditch.

The responding officer, Allison Goodall, reported that all the vehicle’s doors were locked and she had to break a window to gain access to the injured driver. Cribbs had blood coming from his mouth and was incoherent. Americus Fire and Emergency Services arrived and removed the driver from the vehicle.

When Gold Star EMS arrived, the officer reported, Cribbs would not allow EMS personnel to render aid. After several minutes, Cribbs became calm and allowed EMS to place him on a spine board for transport to Phoebe Sumter Medical Center. Goodall’s report said EMS notified the Life Flight team in case the patient had to be transported to another medical facility.

The report said Cribbs was stabilized after arriving at Phoebe Sumter ER and was coherent and answering her questions. Cribbs told the officer he takes medication for epilepsy and the last thing he remembered was driving around the curve at the intersection of Ga. Highway 27 East.

There were no charges against Cribbs.