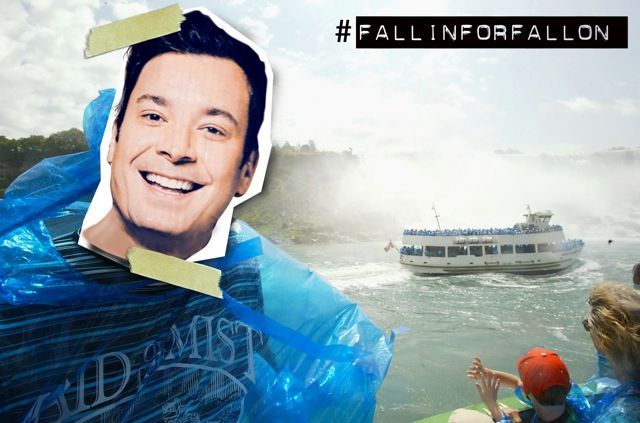 Jimmy Fallon will soon be the new face of Niagara Falls, New York, whether he likes it or not.

According to Michelle Blackley, Communications and Community Relations Manager for the Niagara Tourism and Convention Corporation, the city plans to place blown-up photos of the “The Tonight Show” host’s face at various tourist attractions around town “so he can see what a good time he’d have here.”

The promotion is part of a new campaign to redeem the image of the American side of the Falls, which is often panned as inferior (in terms of its views) to the Canadian side.

Fallon got in on the debate as the newest detractor of the Falls.

During an episode of “The Tonight Show” last week, Fallon asked actress Nicole Kidman how she spent New Year’s Eve. Her answer: attending a concert headlined by her husband, country star Keith Urban, in Niagara Falls–the Canadian side.

“Why is that [the American] side so much worse,” Fallon, a New York native, asked rhetorically.

“The Canada side is… almost like Vegas. It’s fun,” Fallon said. “The U.S. side is like a Lemony Snicket book cover. Sad. Trees with no leaves on it. What happened?”

“Our Niagara Falls USA is not only home to a gorgeous World Wonder, but it is a place rich in history, culture, outdoor life, shopping, adventure and agriculture,” the organization responded in a Tuesday press release. “There are hundreds of attractions and things to do in Niagara USA year-round. We need to make sure that Fallon and all of his fans know this, too!”

Blackley says her Twitter timeline “started to blow up as soon as he [Fallon] said that. It wasn’t people locally, it was my friends in New York saying ‘oh my gosh, I can’t believe he said that, you’ll have to do something.'”

A week later, she is.

On Tuesday, Blackley and Co. began promoting the hashtag #FallinForFallon on Twitter, Facebook, and Instagram in the hopes that “the campaign takes off and that people take notice.”

Especially people at “The Tonight Show.”

She hopes the photos of Fallon, which according to the press release are “designed to show Jimmy just how great he looks here”, will add to the fun and effectiveness of the campaign, the launch of which coincides with an invitation for Fallon to visit the Falls extended by mayors of both Niagara Falls, NY and Niagara Falls, Ontario.

“We’d love for him to bring his wife and kids here,” Blackley says–and while he’s at it, “The Tonight Show” cameras.

Why not shoot some footage for the show at Old Fort Niagara (“He could participate with some of the reenactors and do a musket demonstration”), Blackley asks. Or on the Niagara Wine Trail, or the Maid of the Mist, or any of the other locations where Fallon’s photo will be placed.

“To say that we were shocked to hear of Fallon’s comments would be an understatement,” Tuesday’s press release reads. “But here in Niagara, we are willing to forgive and forget.”