Alabama billboard about #whitegenocide taken down 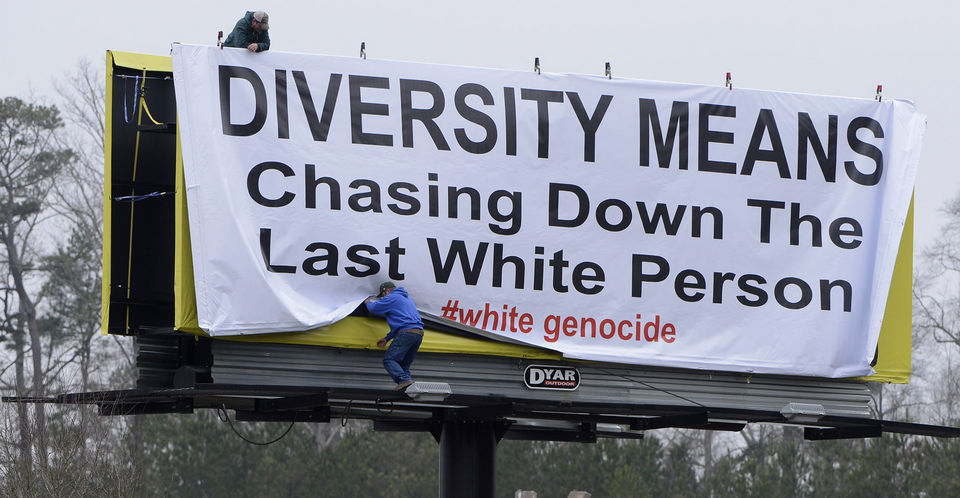 A mysterious billboard along an Alabama interstate with a message about “white genocide” linked to a racial segregationist organization was taken down Wednesday after the town’s mayor publicly denounced the message.

“The City of Springville has a history of promoting racial harmony for many years,” Springville Mayor William Isley said Tuesday. “Any message which cuts against such harmony is very disturbing to the City and is inconsistent with the desires and intent of the City government. The City has no connection or control over the sign at issue and denounces the message thereon as being racially offensive.”

Located along Interstate 59 near Springville in St. Clair county, the billboard reads “Diversity means chasing down the last white person,” featuring the hashtag #whitegenocide, which has yielded consistent traffic on Twitter.

Said to be posted Friday, the billboard and a similar one posted back in 2013 which read “Anti-racist is a code word for anti-white,” features phrases linked to the White Genocide Project, an online entity whose focus encompasses white separatism and unity.

According to the Project’s website, this is the second billboard to go up up in the state of Alabama. The first, located near Leeds, Alabama, went up in 2013 and was linked to Michael Hill, president of the Southern Nationalist organization, The League of The South.

In 2014, The League paid for several “SECEDE” billboards posted throughout Alabama, including one near Montgomery and one near Tuscaloosa. Though the owner of the Montgomery billboard, Lamar Advertising, pulled the billboard due to advertiser complaints, Hill received credit for money spent.

There is no information presently linking Hill or The League to the Springville billboard.

According to Ryan Lenz of the Southern Poverty Law Center, the White Genocide Project surfaced in recent years in reference to White Rabbit Radio, linked to Timothy Murdock of Dearborn Heights, Mich. Murdock, who goes by the nickname “Horus the Avenger,” is known online for references to an anti-diversity, anti white genocide message known as the “Mantra,” originally penned by white segregationist Robert Whitaker.

Verbiage featured on the billboard is unique and derivative of the Mantra and is a part of an “orchestrated and calculated communications system” of the racist right, said Lenz.

“If White people were superior we wouldn’t be facing genocide, would we? The media love to call us ‘supremacist’ because it conjures up images of street gangs with swastikas tattooed on their foreheads selling drugs,” Goode wrote. “The bottom line is: they’re only saying that because we’re White.”

Goode, who is also affiliated with a similar swarm-linked site titled “The Bugs Buddy”, alluded to a future billboard planned to go up in the northern U.S. in the future.

“If you’re tired of tripping over all your stacks of cash, how about donating to the ‘Diversity is a codeword for White Genocide’ billboard project? To get this billboard up in the Northern US they need another $3,500.”

Regarding the project mentioned in Goode’s post Monday, a YouTube clip dating back to last February has surfaced, featuring the moniker of the proposed billboard. According to the billboard’s supporter site, the project has received $2,436 of the $6,000 needed to create and post the billboard in the northern U.S.

The billboard’ Alabama-based owner, Dyar Signs, could not be reached for comment, but the billboard near Birmingham now reads “AVAILABLE.”

The Birmingham (Al.) News contributed to this story.