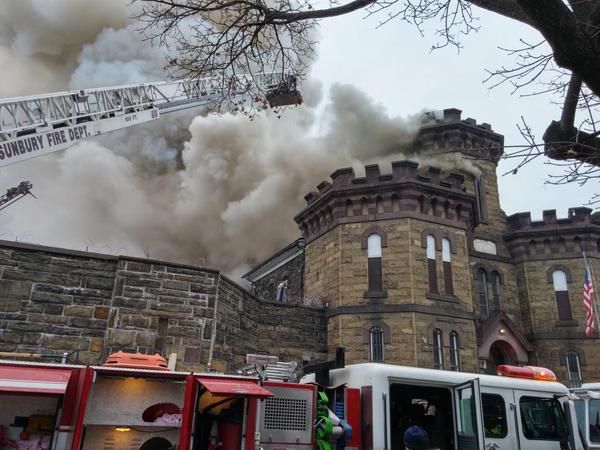 SUNBURY, Pa. – A stubborn fire destroyed the 19th century county prison Wednesday in this central Pennsylvania city on the Susquehanna River. The staff and all 208 inmates safely escaped.

Stephen Bridy, chairman of the county commission prison board, said the blaze appeared to be set off by an electrical fire at 2 p.m. Thick smoke from the burning site in downtown Sunbury could be seen miles away.

County Commission Chairman Vinny Clausi said the 140-year-old stone structure with castle-like parapets is likely “a total loss.”  Fire officials were still battling the fire into the evening, and said they expected it to burn all night.

The prison houses men and women prisoners in separate wings. They range from low-level offenders to inmates being held for robbery, rape and other serious crimes. Murder defendants are also held there, pending the outcome of their court cases.

The inmates were moved to a nearby church by police and guards when the fire broke out. They were later transported by bus to separate male and female state prisons in the area.

Bridy said fast response and “excellent execution” by fire and police units resulted in an orderly evacuation from the prison.

“Thank God no one was injured,” he said.

Sunbury is located 40 miles north of the state capital of Harrisburg. The prison is two blocks from the east bank of the Susquehanna River.

Details for this story were provided by the Sunbury, Pa., Daily Item.