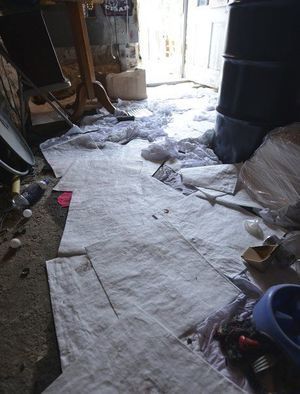 With oil prices what they are, most homeowners would welcome a free delivery.

That is, of course, if they heat their home with oil.

Unfortunately, Sarah Antczak of Andover, Massachusetts does not — a fact that an employee for Haffner’s Oil Company was unaware of when he showed up Wednesday morning to make a delivery.

The employee mistakenly pumped 88 gallons of home heating oil into the Antczak’s basement before an astute neighbor who was actually waiting for an oil delivery himself could signal him to stop.

“I’ve lived in this home my whole life, and I can’t remember ever having oil,” Antczak said.

Antczak’s heating system was switched over from oil to natural gas more than three decades ago, she said. However, while the oil tank was removed, the connecting pipe was left in place.

So when the Haffner’s employee arrived, he mistook Antczak’s home for her neighbor’s address, and simply hooked up the oil hose to her pipe. But there was no tank for the oil to flow into.

Alfred Cavallaro said he immediately realized something was wrong when he saw the company hooking up to his neighbor’s house across the street.

“I hollered across and said, ‘There’s no tank! There’s no tank!'” Cavallaro said. “I didn’t know there was a fill pipe over there still, but there was and he connected the hose and started it. But I told him he’s got the wrong house. I saw the slip and said, ‘No, you’re supposed to be at that one!'”

The Andover Fire Department responded to the incident, as did town health officials, representatives of the state Department of Environmental Protection, and TMC Environmental, Inc. of Portsmouth, New Hampshire, which Haffner’s called to tackle the cleanup.

While the spill was expected to be cleaned up on Wednesday, Antczak wasn’t sure if she and her two children, ages 4 and 7, as well as her grandmother, who lives with them, would be allowed back inside right away.

Fire Chief Michael Mansfield said the cleanup and restoration of the house will be an extensive process that will likely displace the family for an extended period of time.

A spokesman from TMC Environmental Inc. said that most oil trucks can deliver 20 to 30 gallons of oil per minute so the oil was likely flowing into Antczak’s basement for up to three minutes.

He said TMC’s crew would be working for hours to remove and salvage the affected materials from the home, as well as trying to isolate the odor in one area at a time.

“He felt bad,” she said. “You know how you get a first impression of someone? He was a nice guy. It was just an honest mistake.”

Tim Lima writes for the Eagle-Tribune in North Andover, Massachusetts.