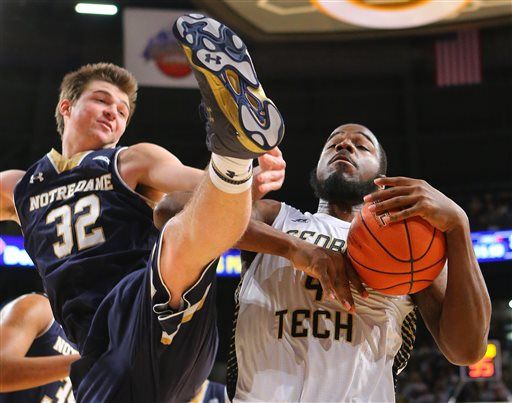 “Road wins in the ACC are never easy,” Grant said. “Even without your starting big guy, to not have him and still get a road win is huge.”

The Fighting Irish (16-2, 4-1 Atlantic Coast Conference) secured their best start to a season since 1978-79 and have won 12 of 13 since losing by one point to Providence two months ago.

Pat Connaughton, V.J. Beachem and Bonzie Colson each finished with 10 points, and Demetrius Jackson had nine for Notre Dame, which has won 12 of 13.

Irish coach Mike Brey said Auguste, who has averaged 14.3 points and 6.4 rebounds, missed the game because of an academic matter, but Brey would not speculate on a timetable for his return.

Colson, a freshman, was the beneficiary of Auguste’s absence, getting career highs in points and minutes. Brey was impressed with Colson’s toughness.

“He catches an elbow in the face and he’s bleeding,” Brey said. “He energized the rest of our group with how he played and kind of taking that bone to the face.”

“Yeah, it’s frustrating, no doubt about,” Georgia Tech coach Brian Gregory said. “At the same time, you’ve got to keep battling through and know that you’ve done a lot of good things but not enough of them or at the critical times. I think that’s a big thing.”

Marcus Georges-Hunt, who led the Jackets with a 13.3 scoring average, went 0 for 6 and was without a field goal for the first time in his three-year career. He finished with six points.

The teams met two weeks ago in South Bend, Indiana, with the Irish winning in double overtime.

Martinas Geben started in Auguste’s spot, but went scoreless in 6 minutes. Brey liked how Vasturia and Colson, who combined to go 7 for 11 from the field, stepped up in Auguste’s absence.

The Irish struggled to end the first half, but better ball movement and shot selection helped them take a one-point lead on Connaughton’s straightaway 3 with 14:57 remaining.

It was Notre Dame’s first lead since the game’s first two minutes, and the Irish led for most of the next 10 minutes before Cox hit a pair of free throws to put the Jackets up 56-55 at 4:48.

But Vasturia followed with a layup and the Irish held the same one-point lead as both teams went cold from the field for most of the final four minutes. Grant’s jumper with 21 seconds to go made it a three-point game, and Vasturia sealed the victory by hitting a layup to make it 62-56 with 8 seconds remaining.

Notre Dame: Connaughton joined Chris Thomas from 2002-05 and Pat Garrity from 1995-98 as the only Notre Dame players to start 100 consecutive games. Connaughton has been on the court for 127 of a possible 130 minutes in last three games.

Georgia Tech: Only Georges-Hunt and Mitchell have started every game this season.

The teams exchanged hard fouls midway through the second when Chris Bolden was called for a technical in the lane and Connaughton knocked down Georges-Hunt near the top of the key on the next possession.