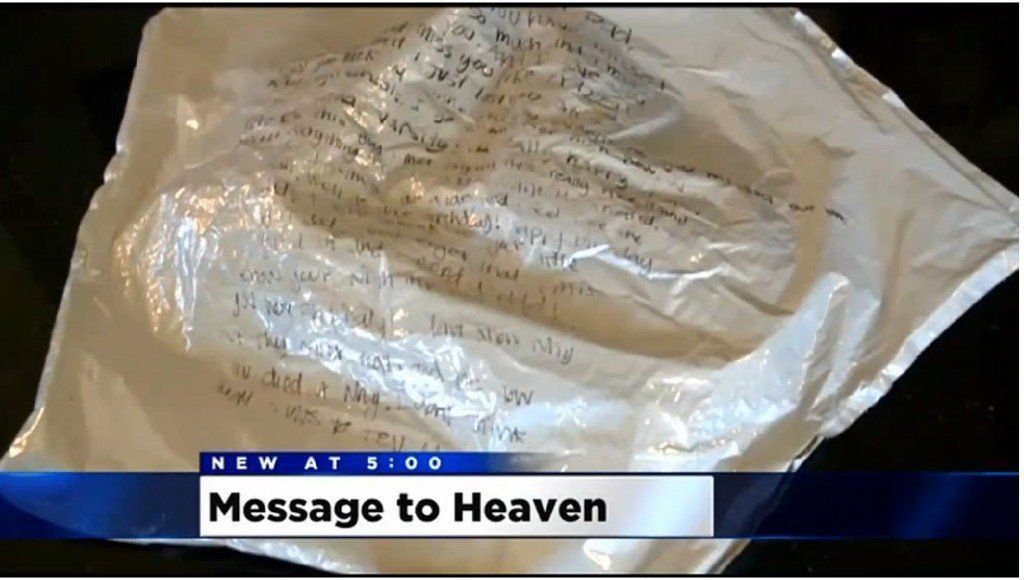 For the past four years, since her dad died of a brain aneurysm in 2010, 16-year-old Ashlynn Marracino has written him a letter on his birthday, Jan. 6. Her routine has been to attach it to a balloon and release it, hoping it would reach him in heaven.

This year, when Marracino launched her balloon from Whitter, California, she asked for something specific from her departed father, according to sacramento.cbslocal.com.

“I’ve been playing softball for 11 years now,” part of the note read. “Can you believe it? I hope you helped me out with all those home runs. I don’t like how I never had you in my life. It’s not fair. Show me a sign please. Anything to let me know you’re there. I miss you so much and I want you back.”

Several days later and more than 400 miles away, the balloon finally came down in the parking lot of the burger joint, Local Heroes in Auburn, California. Jacob Brandt found the rumpled and dirty balloon and was set to throw it away.

But Local Heroes owner Lisa Swisley saw that it was not a normal piece of trash. Then they saw the note.

“We started reading it and realized what we had here and got kind of emotional about it,” Swisley told CBS Sacramento. “‘Happy birthday Dad. I will always be your little girl dad, don’t forget that I miss you.’”

Swisley knew then, they had to do something. They found Marracino on Facebook and using a Pay It Forward page on the social media site, she began collecting donations to send the teenager a care package.

“Jewelry and photo albums, some letters, messages of support and love from here in Auburn,” she said. “She asked in the letter to send her a sign and so maybe it came here for a reason.”

According to KCBS-TV, Swisley and Marracino spoke on Skype Monday. Marracino said the entire saga and journey of the balloon was a sign from her father.

“I told him to show me a sign, and I think this is a sign to not hold grudges and to forgive really easily,” Marracino said. “That he loves me and let’s not be down or get down on myself.”