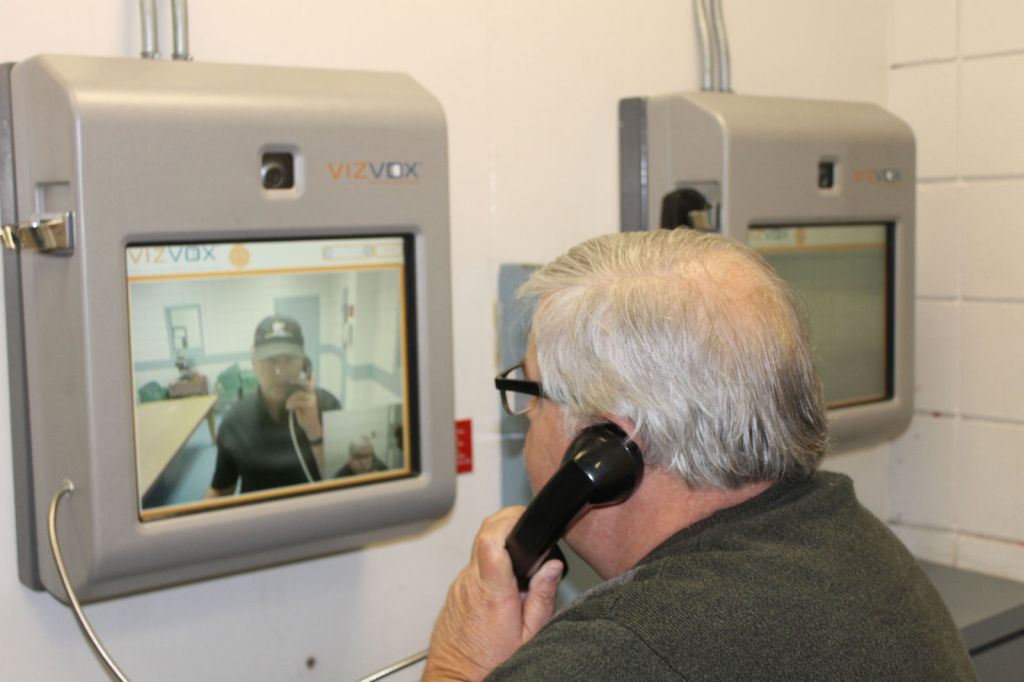 AUSTIN – Jailhouse visits are among the latest casualties of the digital age, with conversations squeezed through metal grates or thick plastic dividers replaced by Skype-like computer calls.

Some are now revolting against the technology, calling it a poor substitute for human contact. It makes prisoners more prone to disciplinary problems, research shows, and more likely to re-offend.

“In-person visitation is an important part of making sure incarcerated individuals can transition back into normal lives,” said state Rep. Eric Johnson, D-Dallas, who wants to stop communities from subbing in-person visits for digital ones.

Johnson’s proposal to preserve the option of face-to-face contact would affect the 10 counties that have eliminated in-person visits with jailed prisoners and prevent others from adopting video-only visitation.

Supporters of video visitation in those communities say the practice is efficient, freeing jail staff from burdensome monitoring duties, and makes visiting easier on prisoners’ friends and relatives who live far away.

In Ellis County, which adopted video-only visitation in 2011, the jail administrator said a video system saves him from moving 420 prisoners in and out of visitation tanks, 15 at a time, for twice-weekly, 20-minute visits.

Otherwise, visitors must use video equipment in the jail if they want to see and hear prisoners. The county owns the system – about 20 monitors downstairs for visitors and about a dozen for inmates, Ogden said. There’s no charge to use it.

But money enters into the equation in many cases.

The Texas Criminal Justice Coalition found that video fees charged to visitors can run about $10 for a 20-minute call.

“In addition,” wrote the study’s authors, “many companies require a minimum deposit for opening a video account and do not readily refund the balance if a prisoner is released.”

That’s another reason that Johnson introduced his legislation. In an email, he noted that families who cannot afford a video visitation fee should still be able to see their loved ones.

“Do we want to make a few bucks off of inmates, or do we want them to straighten their lives out upon release?” he said.

Johnson said his bill was inspired by concern in his district that Dallas County was going to end in-person visits after installing a video system. The proposal would not prohibit video-visits, but rather provide an option.

In-person visits helps them maintain bonds with their family, he notes, and ultimately transition back into a lawful, productive life.

“There has been a movement for several years in the legislature to reform our criminal justice system to reduce recidivism,” he said. “Cutting off in-person visitation would be counter-productive to that goal.”

There’s research to support his view. The American Bar Association has recommended keeping in-person visits, even when video chats are available. A Minnesota study showed that a single, in-person visit reduced re-offending rates by 13 percent for new crimes and 25 percent for parole violations.

The Criminal Justice Coalition noted a lack of concrete evidence of “any positive effects” of video visits offered by supporters of the practice.

The county contracted its jail-telephone vendor for the equipment installed two months ago.  Like Ogden, Littleton said he likes not having to move inmates around for visits and checking for contraband afterwards.

The system also gives him more flexibility in scheduling visits.

In addition, Bastrop County’s system has the capacity for remote video visits, in addition to calls that originate from inside the jail.

Once the county pays for the system – in three or four years, Littleton said – the remote visits will generate a commission for the jail – about 20 percent of the cost of each call.

“People can still come down here,” he said. “It’s just like the old visits. It’s just not face-to-face.” And the traditional setup is still in place, he said, ready for use if the video system is out of commission.

Littleton noted that the jail’s virtual visitors are coming from out of the area or out of state.