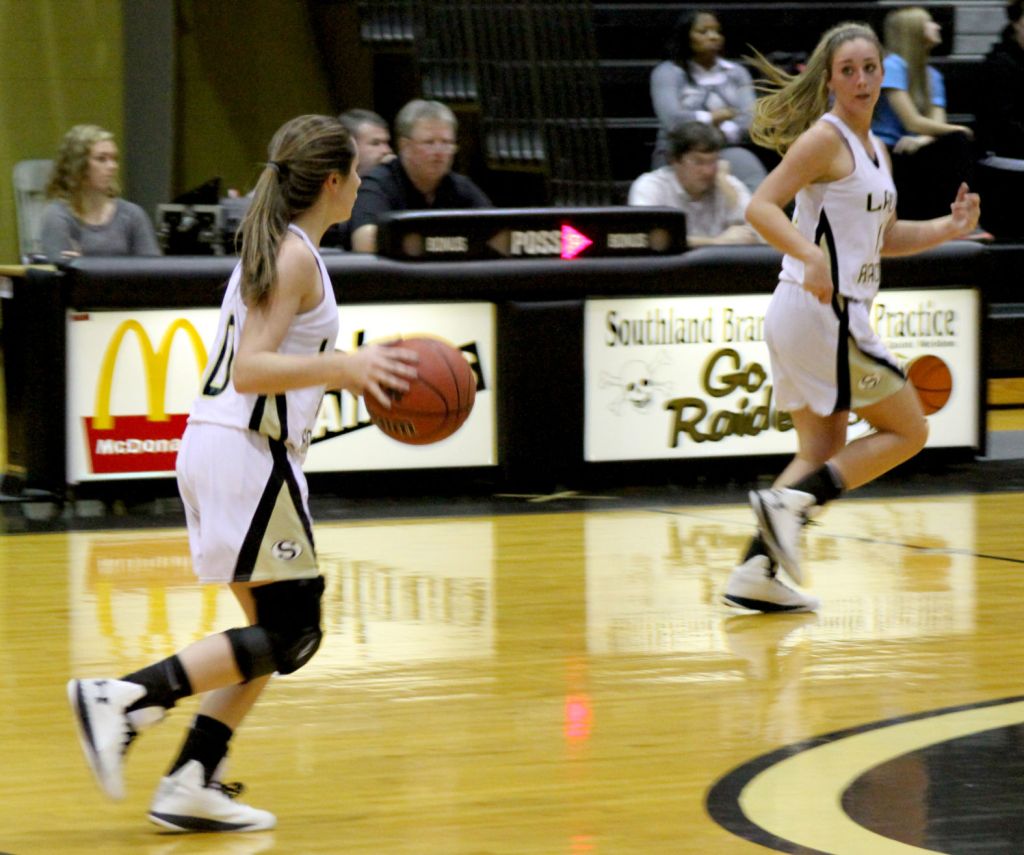 On the heels of a close 36-39 loss to the Tiftarea Lady Panthers, Southland Academy’s Lady Raiders got back into the winning bracket on Jan. 10 with a 49-23 home win against the Brookwood Lady Warriors of Thomasville. The team traveled to Dawson on Jan. 13 to face the Terrel Academy Lady Eagles, falling 45-62 in the match. This series of games leaves the Lady Raiders with a 1-3 region record and an overall record of 3-7.

The Lady Raiders continued their defensive effort in the second frame to put pressure on Brookwood’s guards. Head coach Paula McDonald stated “We took every advantage of opportunities given to us by being patient on the offensive end as well.”

The Lady Raiders gained 14 points in the second frame to take a 29-9 lead going into the locker room at half-time.

The Lady Raiders continued to run through Brookwood in the third quarter, even allowing second-string players to get some valuable playing time. The team added 10 more points to their substantial lead while holding Brookwood to eight.

McDonald further stated “We were able to work on our new defensive set with all the kids and it gave some valuable experience to them.”

The Lady Raiders posted 10 more points in the final stanza to bring the score to 49-23 at the game’s conclusion.

The Lady Raiders would not have such an easy time against the Terrell Academy Lady Eagles in Dawson on Jan. 13.

McDonald said, about the game, “Terrell Academy met us at the tip off with a fire that we were unable to match. We were immediately hit with their full court press that proved to work for them as we had trouble bringing the ball down the court. The momentum was definitely in their favor and they rode it. We were able to connect for 10 points in the first quarter and hoped that we would settle down some in the second.”

The Lady Raiders attempted to gain their feet in the second frame, but several of their scoring attempts rimmed out and the Lady Eagles capitalized on their misses to take a 33-12 half-time lead.

The second half led to some opportunities for the Southland ladies and they managed to get their inside game going. Terrell’s defense, however, would not let relent with their trapping press and held the Lady Raiders to 13 points, heading into the final frame up 47-25.

McDonald went on to elaborate on the game’s final quarter, stating “Our all over man defense helped give us a surge in the fourth. We caused the Eaglettes to miss some shots and got several backside rebounds to prevent them from gaining put backs. Our girls played hard and fought well, but we still lost Rebekah Davis & Madison McPherson to fouls. Our younger girls came in and rose to the occasion with strong defense and nice shooting. Freshman Kathleen Kinslow scored all nine of her points in the fourth. We put up a more balanced scoring effort that period and cut the gap to 45-62 as the final score.”

The Lady Raiders return to action in Americus on Jan. 16, facing the Glenwood School Lady Gators of Smiths Station, Ala.

The Lady Raiders face Brookwood again on Jan. 30 in Thomasville and will battle Terrell Academy once more this season on Feb. 3 in Americus.