Serial diaper dumper on the loose in Oklahoma? 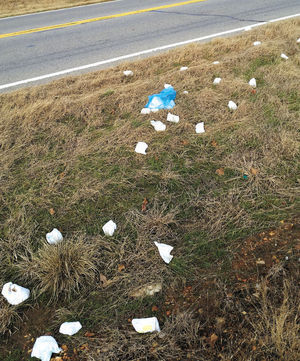 Hundreds of used disposable diapers have been found scattered around highways in Tahlequah, Oklahoma for the past three weeks, creating what environmentally minded residents consider an eyesore. And a nose sore.

“Someone is throwing them out of their vehicle, I believe,” said Tahlequah resident Ed Brocksmith.

Brocksmith, a volunteer with a local environmental conservation group, brought the stinky situation to the attention of Oklahoma Scenic Rivers Commission Administrator Ed Fite. Since then, he and Fite have located eight different groups of diapers tossed onto the side of the road. At least two of the clusters appeared in the same area but at different times.

“In each case, I’d estimate there are anywhere from a couple dozen to 80 diapers,” Brocksmith said. “I picked up more than 80 in one spot.”

In another location, Fite picked up more than 120.

Both Brocksmith and Fite said light blue bags appearing to be diaper pail liners were found among each group of diapers.

Brocksmith said due to the number of diapers and the frequency of their disposal, and that they’ve have been found in different areas, he believes they are being dumped by an unlicensed day care center.

Fite said it is unclear whether someone is throwing the diapers out or they are falling off a vehicle.

His employees and volunteers often find unusual and unsightly items along the banks of the Illinois River and State Highway 10, but used disposable diapers are particularly difficult to clean up.

“If you have ever tried to pick up a soiled baby diaper that has been out in the elements, they start to come apart,” Fite said.  “It’s really kind of disgusting to clean those up.”

Brocksmith said the brand of diapers found along the side of the road turn into “a massive gel,” making them hard to handle.

“For the life of me, I don’t know why someone would do this,” Brocksmith said. “It’s just a rude, senseless act.”