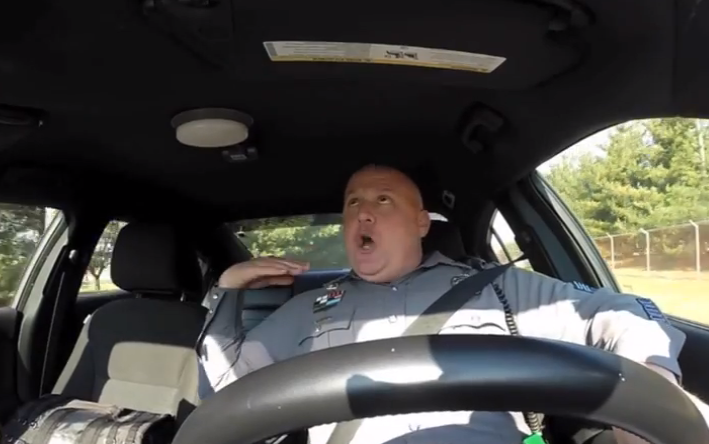 Yes, it’s staged. But you can’t really say it’s not real. Because to those who know him, that’s just Master Corporal Jeff Davis. The life of the party. The first one on the dance floor. The guy you probably would see in a police cruiser rocking out to Taylor Swift’s “Shake it Off”, which is probably why the instantly viral “caught on camera” video of him doing just that looks so convincing.

“It was supposed to be sarcasm,” says Mark Hoffman, the Public Affairs and Information Officer for the Dover (Delaware) Police Department, speaking of the video’s introduction. “But some people thought it was authentic.”

Not just some—a lot. Good Morning America. Fox News. Even Delaware Online took the post at face value. As a result, the original YouTube video has been viewed more than a million times since it was posted Friday afternoon.

“While reviewing dashcam footage, we come across some interesting sights to say the least,” the video begins. “We hope you enjoy this…and Taylor Swift,

if you’re watching…we’re sorry.”
“We meant it as something to show the lighthearted side of police officers, that police officers like to have fun, too” says Hoffman, the mastermind behind the stunt. “But anybody who knows Jeff Davis, who works with him, knows that’s him. He’s acting in that video, but that’s completely his personality.”

Davis, a 19-year law enforcement veteran, is the first and only person Hoffman asked to be in the video. That Davis is no stranger to Internet fame was a plus; he says a cell phone video of him “crying like a girl” after his brother attached a crab to his earlobe will be featured on an upcoming episode of MTV’s viral video clip show “Ridiculousness.”

Another thing making him a perfect candidate was that, thanks to his 10-year-old daughter Gabriella—”she knows the words to every Taylor Swift song,” Davis says—he already knew “Shake it Off” by heart.

Has Gabriella seen the video?
“Oh yeah, I’m sure she’s seen it about 100 times already,” Davis says. “She was all for it.”
Hoffman says the video, which was shot with a GoPro camera stuck to the police cruiser’s dashboard, only took two takes, and that the one hitch in the filming actually wound up making the video seem more authentic.

That part near the end where Davis stops bopping his head and looks like he’s been busted by another driver? That happened.

“It was obviously set up to not really have anybody else see me,” Davis says.
“The majority of things, like the first couple of waves, were fake to make it kind of better, to make it look real. But there was a point when a car drove by me and that was without a doubt real. They were pulling out of a parking lot as I was pulling up.”
Hoffman says he made the video to celebrate the department (almost) reaching 1,000 followers on Twitter—Hoffman runs their account—but also “to make us seem more approachable.”
It’s probably safe to say it worked.
“We’ve gotten tons of messages from police officers across the country thanking us for making it,” Hoffman says, “for showing that at the end of the day, we’re not the robots, the big mean people that people make us out to be.”
Hoffman says the video was originally intended as the first in a “DashCam Confessionals” series for the department’s YouTube channel. Now that it’s gone viral, he’s not sure.
“We never expected it to take off like this,” he says.

“We’re thinking of going out on top with this one.”