Muslim call to prayer sounds at Duke University, but not from chapel tower 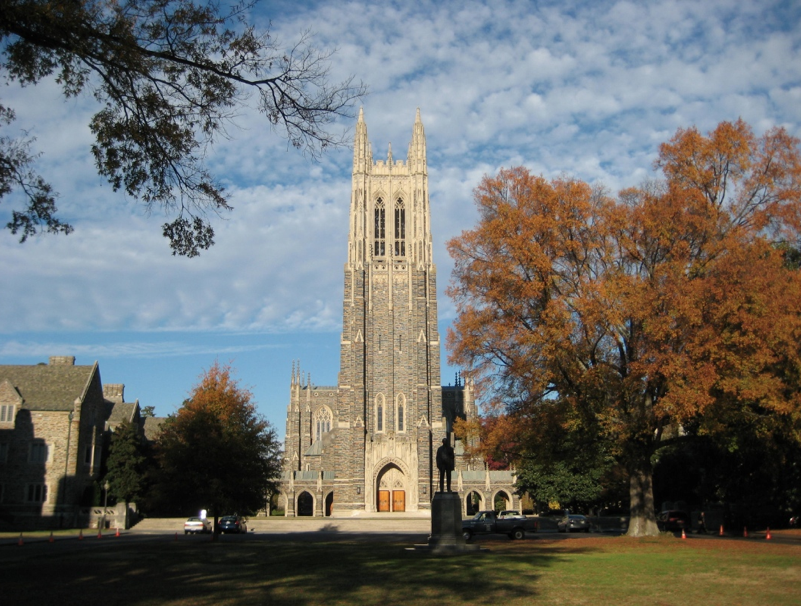 DURHAM, N.C. — The Muslim call to prayer echoed across Duke University’s quad Friday, a day after the school canceled plans to have weekly services begin with an amplified call to prayer from the chapel’s bell tower.

Intense debate — even threats of violence, according to university officials — had led Duke to reverse course. But Friday’s call to prayer, at the base of the chapel instead, was a peaceful gathering.

Hundreds of students and faculty members met in bright sunshine to listen and support the Muslim students, some hugging, some holding signs such as, “Let us worship together,” with a cross and the star-and-crescent symbol.

A speaker explained the history of the adhan, or call to prayer. When the Arabic chant sounded over a loudspeaker, crowd members seemed to hold their breath.

It was a moment that resonated far beyond Duke’s campus, coming at a volatile time, just after a series of terrorist attacks in France that seared new images of Islamist violence into the world’s consciousness and sparked questions about freedom of speech.

“What is happening here is not an Islam issue,” said Omid Safi, director of the Duke Islamic Studies Center. “It’s an American issue. This is a conversation about pluralism and about people who say there should be only one religion in the public arena.

The incident at Duke also sparked concern and debate on other U.S. campuses that have substantial Muslim student populations. Muslim students at American University in Washington and other area colleges said Friday that they felt accepted and regularly attend Friday services — without an amplified call to prayer.

“I can’t imagine what happened at Duke happening here. This is a very comfortable environment for us,” said Zainab Attai, 18, an American University student, speaking after the Friday service there.

But she and other Muslim students said they feared the Duke incident showed the power of high-profile Islamic terrorist attacks abroad to undermine public acceptance of the fast-growing population of about 5 million Muslims in American society.

“We were excited when we heard Duke was going to have the call to prayer,” she said. “It was really disappointing that they canceled it, but in a way, you can’t blame people when they see so many negative images of Muslims and Islam. You have to expect some backlash.”

One reason the decision to broadcast a call to prayer was controversial is that sound can be far more intrusive than a visual image. Isaac Weiner, an assistant professor of religious studies at Ohio State University, said that while a call to prayer might seem benign to some non-Muslims, to others for whom Islam evokes the thought of terrorist threats, it can feel like an aggressive act.

Several experts in religious studies said they were unaware of other universities that routinely have a call to prayer; most university mosques in the United States will focus the call inside, where believers have gathered, rather than externally.

The Duke University Chapel is for many the symbol of Duke and its historic ties with the United Methodist Church, although the university is nonsectarian today.

“We heard from alumni and friends on all sides of the issue, many of whom had thoughtful questions and comments about the role of Duke Chapel in the life of the university that deserve serious consideration,” said Michael Schoenfeld, a spokesman for the university, when asked whether the school had felt pressure from alumni and donors to cancel plans for the call.

The adhan is a familiar sound in many majority-Muslim countries, but it sparked debate at Duke. The reaction on social media was swift. The hashtag #boycottduke spread quickly, and many of the reactions on Twitter called it an anti-Christian move.

Franklin Graham, president of Samaritan’s Purse and the Billy Graham Evangelistic Association, called on donors and alumni to withhold support from Duke until the policy was reversed.

“As Christianity is being excluded from the public square and followers of Islam are raping, butchering, and beheading Christians, Jews, and anyone who doesn’t submit to their Sharia Islamic law, Duke is promoting this in the name of religious pluralism,” Graham wrote.

Threats of violence were called in to the Center For Muslim Life, Safi said.

On campus, most seemed to support the call to prayer and were surprised by the reaction it set off. Many decried a university council’s decision Thursday to not allow the chant to sound from the chapel tower.

“We appreciate the fact that the broadcast of the call to prayer from such a prominent location was designed to be a display of religious diversity and inclusion at a time when the issue of freedom of expression is front and center in the United States and worldwide,” the Council on American-Islamic Relations said in a statement. “It is unfortunate that a prestigious institution like Duke University ultimately bowed to intimidation by anti-Muslim bigots.”

Duke has about 700 Muslim students, and typically, 100 to 125 attend Friday prayers in the chapel’s lounge. Safi said that many Muslim students are attracted to Duke for the “extremely popular” Islamic studies program.

Many students gathered there were sorry that a campus decision seemed to have been overtaken by outside opinion.

If there were a real security threat, said Cameron Tripp, 22, a senior from Asheville, North Carolina, who was raised Methodist but considers himself agnostic, “How does moving it from the chapel tower to the chapel quad change anything?

“I think it’s really sad it was taken away,” Tripp said.

But some saw in the concession a victory of sorts.

Shaker Samman, a 19-year-old Muslim student from Michigan, said the controversy brought people into a more open, public space. “That’s the irony of it,” he said. 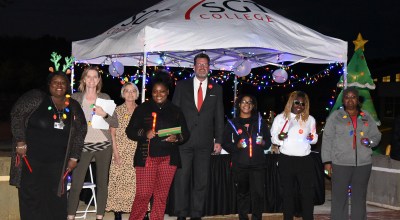