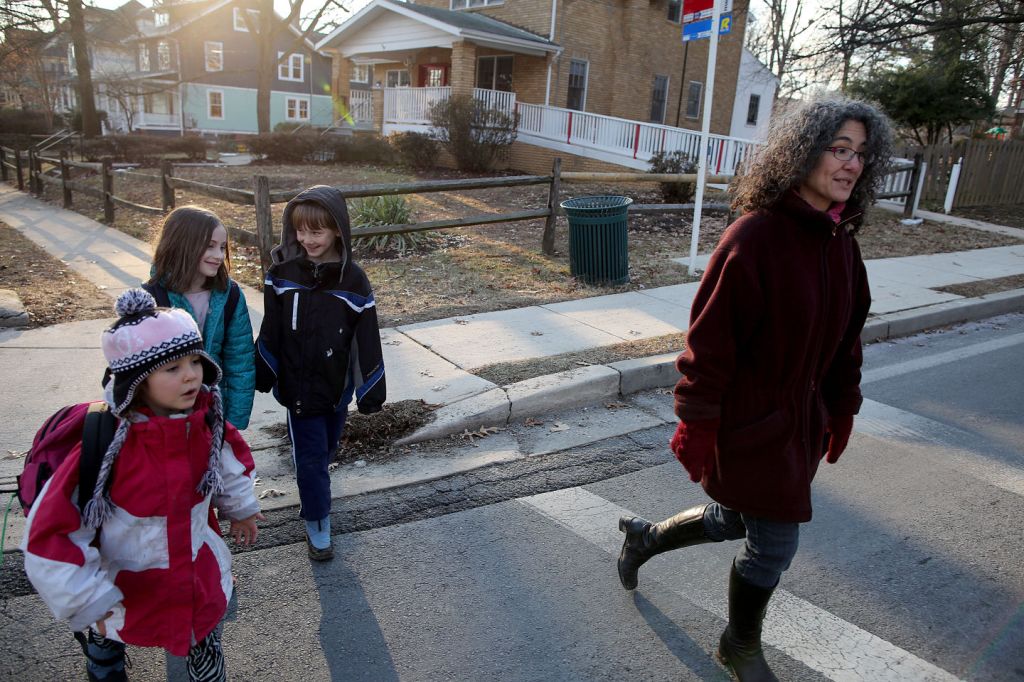 WASHINGTON — Two days after the story of their children’s unsupervised walk home from a park became the latest flash point in an ongoing cultural debate about what constitutes responsible parenting, Danielle and Alexander Meitiv were still explaining their “old-fashioned” methods of child-rearing.

They eat dinner with their children. They enforce bedtimes, restrict screen times and assign chores. They go to synagogue. More controversially, they let their 10-year-old son and 6-year-old daughter venture out together to walk or play without adults.

“How have we gotten so crazy that what was just a normal childhood a generation ago is considered radical?” Danielle Meitiv asked in the living room of her Silver Spring, Maryland, home as yet another news crew dropped by to question the couple.

She and her husband are facing an investigation for neglect, they say, after allowing their children to walk together unaccompanied from a Silver Spring park along busy Georgia Avenue toward home, a mile south.

They made it halfway before police picked the children up, alerted after someone called.

The parents’ tale of being investigated by Montgomery County (Maryland) Child Protective Services for allowing a walk from the park has lit up social networks and set off a national conversation about parenting styles, children’s safety and government overreach. It has pointed up seeming contradictions in law and expectations. Why, many parents asked, are mile-long walks permitted on school days if they are a problem on a Saturday afternoon?

At the center of the whirl are the Meitivs, believers in “free-range” parenting, with its ideas that children learn to be self-reliant by progressively testing limits, making choices and roaming the world without hovering adults. Danielle Meitiv works as a climate-science consultant and Alexander Meitiv is a physicist at the National Institutes of Health.

The idea of free-range kids has been around since 2008, when New York journalist Lenore Skenazy set off a firestorm with a piece titled “Why I Let My 9-Year-Old Ride the Subway Alone” and developed a following forpushing back against what many saw as an overinvolved “helicopter parent” culture.

More than six years later, Skenazy is still pushing the conversation about giving children more freedom to experience the world. She says many parents are terrified by an outsized perception of danger, driven partly by a constant beat of repetitive crime news that makes horrific events seem much more common than they are.

Federal statistics show that the violent crime rate has fallen dramatically from its peak in 1991 and is about what it was in the late 1960s but lower than in the early 1970s, when many more mothers were at home and children roamed freer.

In the past, children stayed out for hours, slept in backyard tents and wandered their neighborhoods. “These are things we all did on our own, and now we don’t let our children do, and there is no real or rational reason except we’re fearful,” Skenazy said.

The Meitiv family’s difficulties have stirred passionate and conflicted responses from parents, and sparked some intense digital debates.

Within hours of Meitiv’s case going public, another Silver Spring parent, Russell Max Simon, who has never met the Meitivs,said he decided “enough was enough” and started the Maryland Coalition to Empower Kids, giving a nod to Skenazy.

Simon said that when he and his partner send their 8-year-old and 10-year-old to a playground two blocks from their home, they cannot help but worry. But not as some people might expect.

“We are more scared of another person calling the police on us than we are that anything bad will happen” to the children, he said.

For many parents, the debate has rekindled memories from their own childhoods about how they wandered freely, explored on their bikes and played games with neighborhood friends until dusk. They lamented that children today don’t have the same chances.

Some said they talk to their children about how to handle strangers or uncomfortable situations and give their children a measure of freedom, but only because they have GPS tracking on their cellphones, so parents can always know where the children — or their phones — are.

Trecia McEvoy, who works on Capitol Hill and lives in the close-knit Beverly Hills neighborhood in Alexandria, Virginia, allowed her children to walk to nearby parks and play outside with neighborhood children with minimal supervision beginning around age 7.

Three years ago, after her then-9-year-old son walked home from school on his own, McEvoy got a call from Alexandria Child Protective Services after someone reported that the child was home alone. (His grandmother was home, and the elder sibling typically arrived home a few minutes later on the middle-school bus, she said.)

“We were stunned and extremely angry,” McEvoy said. “We are the parents. We are the ones who decide what’s best for the children.”

CPS investigators showed up to do a home visit and later apologized, McEvoy said. “We try to raise pretty independent kids. I don’t think you’re doing your kids any favors by protecting them. You’re not setting them up for the real world.”

But while some parents try to give their children a little free-range latitude, others say the stakes seem too high.

“I would NOT let my six and 10-year-old walk to a park alone. I would go with them and sit quietly on a bench nearby as they played,” Patricia Skinner, who lives in Alexandria said in an email to The Washington Post. “I don’t feel like a six year old or a ten year old would have adequate skills to respond appropriately if affronted by a stranger. I wish I felt differently and many say I am overprotective. But the truth is, once something like that happens, there are no redos.”

Some parents say the case has left them thinking about their choices.

Ashley Myler Klick’s 9-year-old daughter has been asking to walk by herself or with their dog to the library in their Del Ray neighborhood in Alexandria. Klick won’t let her, even though it is one block away. She does let the children roam more freely, however, when they visit the small town in south Georgia where she grew up.

“I don’t think I’m a helicopter parent, but I’m not a free-range parent, either. But, I’ve been asking myself since this story came out, why wouldn’t I let her walk to the library? It’s one block away?” Klick said.

“I have 100 percent confidence that my daughter could walk to the library. She could even walk to the Metro one mile away. She’s capable of doing that,” Klick said. “It’s just . . . me.”

In her circles, Michelle Shefter of Silver Spring said people have not stopped talking about the issue. “It’s really hitting this nerve,” she said. “Most people I know feel what these parents did is acceptable.”

Shefter said her children are younger than the Meitivs’ but that she had a big moment with her kindergartner recently, watching as the child walked to a friend’s house down the street. The friend’s mother was looking out, too. Both had cellphones. But it was a first.

“It was awesome,” she said.

Parents have said the case seems to suggest a major contradiction: Many schools don’t provide bus service for students who live a mile away or less. Parents ask: How does a walk home from a park differ from a walk to school every day?

“There’s a disconnect,” said Emily Kirby, a Silver Spring mother of two. “You have two county agencies giving very different messages It seems like they need to be on the same page.”

State laws about leaving children unattended vary widely, and in Maryland, some suggest the law is confusing: Children younger than 8 must be left inside homes and cars with a reliable person who is at least 13 years old. It says nothing about walks outside.

Kirby, like many parents, says she might not have made the same choice about the mile walk that the Meitivs made but believes that the decision belongs to them, not to agencies of the government.

Charmaine Ciardi, who is a child-development therapist in Bethesda, Maryland, and the author of books about children’s stages of growth, said there is no one-size-fits-all rule about when children are ready to be left alone or to roam.

Ciardi tells parents not to wait for big birthdays or milestones but to reassess their children’s development every season and to gradually give them more independence and responsibility. She adviseshelping them practice independence, walking routes with them, then watching how it goes.

The Meitiv children were gradually allowed more freedom, says Danielle Meitiv. She says her son and daughter have paired up for walks around the block, to a nearby 7-Eleven and to a library about three-quarters of a mile away.

This is the second time she has been questioned by Montgomery County’s Child Protective Services.

In late October, she said, she picked up her son and daughter from the bus stop after school and left her children playing in a small park a block away from the family’s home.

She believes a neighbor reported seeing the children unsupervised. Several days later, she got a visit from Child Protective Services. That case was closed without much intervention. Then, on Dec. 20, her husband decided to allow the children to walk home from Woodside Park. Danielle Meitiv was out of town that day.

The children had been pleading to make the walk for weeks, she said..

Officials with Montgomery County Child Protective Services said Friday that CPS could not discuss its cases because of privacy protections and is required by law to investigate under specific circumstances. Neglect investigations typically focus on failure to provide proper care and supervision.

CPS officials said that in considering such a walk, they look at the length of the outing but also factors such as traffic conditions, sidewalks and road crossings.

Danielle Meitiv said she’s hoping that her difficulties spur other parents to feel less fearful about parenting and giving their kids more independence. The family is scheduled to meet again with CPS this week, Danielle said.

Rafi, her 10-year-old son, is all for the family’s approach, he says.

“I feel totally independent,” he said.