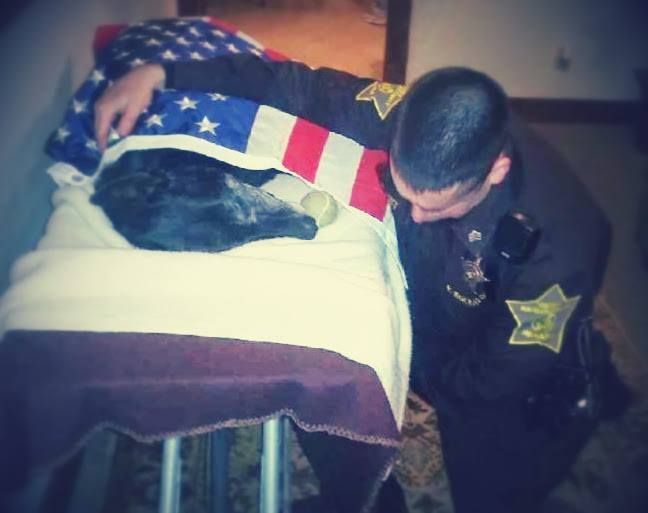 A retired K-9 with the Madison County (Indiana) Sheriff’s Department has died, leaving a void in the life of her law enforcement partner.

“I’m sorry, I’m at a loss for words,” said Mika’s handler Sgt. Paul Kollros after a brief moment of silence. “I am just thinking about all the times we had together.”

Mika, a 13-year-old Belgian Malinois, was euthanized at 5 p.m. on Thursday. She joined the Madison County Sheriff’s department in 2005 and retired in 2014 after being diagnosed with cancer, said Kollros.

“She was having trouble getting up and breathing so I felt selfish keeping her alive when she was in so much pain,” he said. “Even though it was the hardest thing I had to do, it was the right thing.”

Mika is the third K-9 to die since the department implemented the police dog program.

According to the American Kennel Club, the Belgian Malinois is similar to German Shepherds in appearance, but they have a smaller, lighter body frame. They are imported from Europe, where the breed is used for herding, have high energy levels, are quick in apprehensions and valued for intelligence.

Kollros said Loose Funeral Home & Crematory is cremating Mika at no cost to him or the department.

During her career, Mika worked with the Secret Service when presidential candidates came to Madison County, as well as officials when the Super Bowl was in Indianapolis. Her work also brought her into contact with President Barack Obama and former Secretary of State Hillary Clinton.

Following Mika’s retirement from the police department, Kollros started working with his new partner Lars, a German Shepard who is two years old.

German Shepherds are the most common breed used in police work and, like the Belgian Malinois, are known for their work ethic.

He said police dogs also become a part of the handler’s life because they are always together — on the job or at home. This is one of the reasons why Kollros struggled with Mika’s death a day after she was laid to rest.

The sun was just starting to dip below the horizon on Thursday when a long procession of police cars escorted Mika’s body to the funeral home in Anderson, Indiana. She had just been euthanized by a veterinarian in Alexandria.

Kollros estimated that about 25 officers participated in the motorcade, but he said it was hard for him to recall some of the events from Thursday. The officers were from Delaware County, Anderson Police Department, Alexandria Police Department and the Madison County Sheriff’s Department.

“I was in a different state of mind that day,” he said. “The sheriff led the procession for us which I thought was awesome.”

Four K-9 handlers carried Mika’s body from the veterinarian’s office and placed her in a police car for the procession.

A picture Krollos posted to Facebook shows him kneeling next to Mika with his head bowed and arm around her shoulders. An American flag draped his former partner’s body and a worn tennis ball is at Mika’s side.

Traci Moyer writes for the Herald Bulletin in Anderson, Indiana.