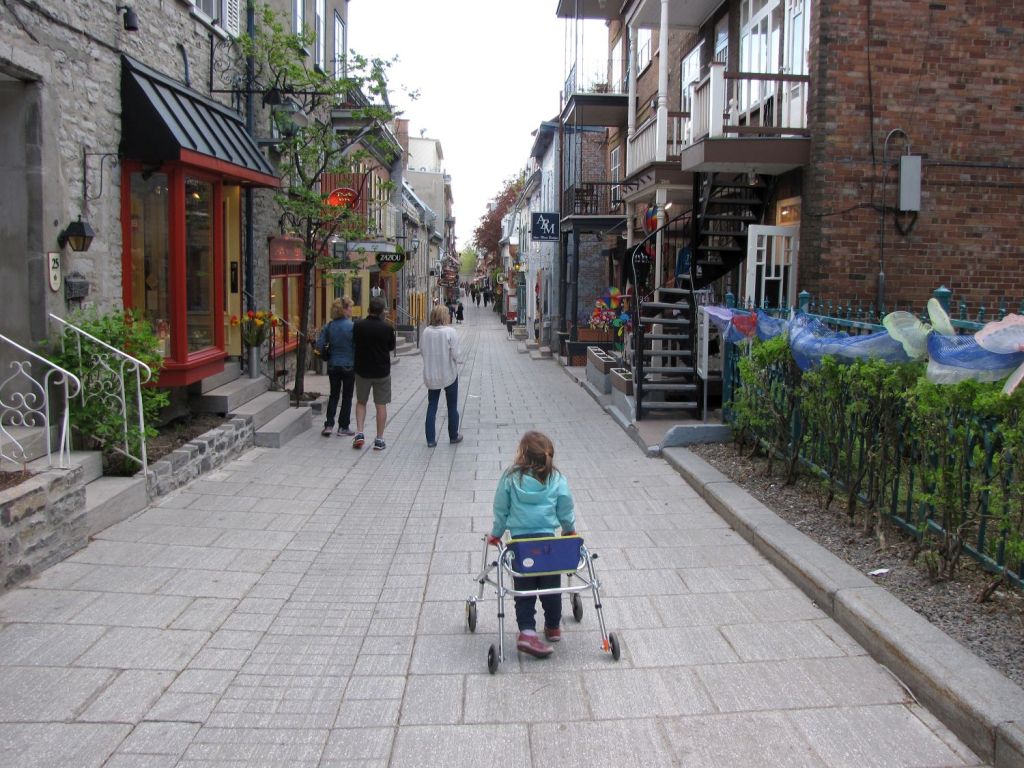 QUEBEC, Canada — Here’s how my family rode the funicular in Quebec City for the first time:

1. We collapsed a huge, unwieldy jogging stroller and begged the attendant to let it ride down alone on a disabled-access elevator, even though it’s not technically a wheelchair;

2. Guided our daughter, Chloe, through the gift shop where the upper town funicular entrance is located, and tried to prevent her from knocking her wide metal walker against a tower of Quebec City magnets and Chateau Frontenac shot glasses;

3. Stepped onto the glass-walled funicular and enjoyed views of the lower town rooftops and sparkling St. Lawrence River;

4. Retrieved and reassembled the jogging stroller, and repeated the gift shop scene at the lower town funicular exit;

5. Stood flustered and dejected for a moment as we realized there were two small stone steps standing between us and the quaintness of Rue du Petit-Champlain.

Travel was relatively new to me seven years earlier, when I alighted in Europe for the first time. My husband, Brian, and I went to Rome, and I couldn’t wait to climb the Spanish Steps. Never mind that the view from the top was of Via dei Condotti, a street lined with shops like Gucci and Valentino that I couldn’t even afford to peek into. I was at the top of the Spanish Steps, and all was right with the world.

As for travel? I was hooked.

From Rio de Janeiro’s Escadaria Selaron, to the “Rocky Steps” at the Philadelphia Museum of Art, iconic staircases have a way of beckoning tourists. Now, though, as the mother of a 5-year-old girl with a physical disability, stairs — iconic or otherwise — are sources of stress. So, too, are other beloved characteristics of the world’s most beautiful cities. Charmingly uneven cobblestone streets become a dangerous annoyance for my daughter, who uses a rolling walker to get around. Cute little souvenirs shops become impassable rooms full of breakables. Easy-to-access subway lines mean the overpowering smell of urine in filthy subway elevators. And we haven’t even experienced airline travel with the walker yet.

Such roadblocks could be enough to just stay home and let my passport expire. But I love to travel, and I really don’t want to become a grumpy curmudgeon. And, more important, Chloe loves travel, too. She has a world map taped to the wall next to her bed and regularly traces her finger over the places she wants to visit the most: Iceland, China, Russia, Australia. I want her to see the world despite — or really, because — so much of it might seem closed off to her because of her disability.

The world is built for the able-bodied, for sure, but our family is learning that with some advance planning and a lot of patience, traveling with a disability is very doable. It’s a bit slower and sweatier than it was before. It’s a lot more frustrating. It sometimes makes me flare up in righteous anger that everything doesn’t have a ramp attached to it. But seeing the excitement on Chloe’s face as the Canadian border officer stamped her passport for the first time erased all of those worries, at least momentarily. Travel would be in her future, steps be damned.

Steps aren’t always easy to damn, though, as we were reminded when we pulled up to the lovely, circa-1870 Hotel Clarendon, which we chose for its central location in Old Quebec. Although a makeshift ramp was propped over the hotel’s stone entrance steps, it was far too steep for Chloe to walk up. And thus began several days worth of acrobatics getting in and out of the hotel. The bellmen were incredibly helpful, rushing outside to meet us on the sidewalk when they saw us coming. Once inside, the hotel is actually quite navigable, thanks to a handy — if a bit old and slow — elevator. Chloe quickly earned a well- deserved nickname from the concierge, Pierre, as she and her walker cheerfully clattered and stormed across the marble-floored, Art Deco-style lobby: Smiley Tornado.

We focused our three night-stay on the 400-year-old Old Quebec, a UNESCO World Heritage site that’s North America’s only walled city north of Mexico. We might have been magically deposited in Paris as we drove under the archways of Old Quebec’s ancient stone fortifications.

Quebec City is atop Cap-Diamant, a dramatic promontory that rises above the St. Lawrence River, and we learned that the funicular linking the upper and lower sections of Old Quebec isn’t simply a joyride for tourists. The district’s streets are so treacherously steep that railings are affixed to the sides of buildings for sidewalk safety. After we discovered that getting on and off of the funicular wasn’t easy with the stroller or walker, we made the mistake of trying to walk down one of the long hills into the lower town.

Brian, with his arms outstretched and his calves seizing, struggled against gravity as he gripped the jogging stroller, which contained not only a 40-pound kid, but her folded-up walker, too. He held on for dear life as we navigated the curving sidewalk that plunged downward at a 45-degree angle. He and I reached the bottom nervous and breathless, but Chloe thought the wild downhill ride was pretty fabulous.

Hills aside, we found Old Quebec a perfect place for Chloe to tool around and explore with her walker, especially pedestrian-only squares such as Place Royale and streets like Rue du Petit-Champlain, where she was free and safe to zoom off ahead of us, admire window displays or listen to an accordion player who tried (unsuccessfully) to get her to dance to his music. Also perfect for Chloe in her walker was the wide and flat Terrasse Dufferin, a long boardwalk overlooking the St. Lawrence. Not only are there dramatic river views, but the boardwalk is dotted with large glass structures that provide windows down into the excavated underground ruins of the 17th-century St.-Louis Forts and Chateaux. Chloe was exhilarated as she and Brian raced up and down the boardwalk again and again, relishing a sweet, windy, open-air freedom that she doesn’t get to experience every day.

Because Chloe gets pretty tuckered out walking long distances, she rode in the stroller from place to place and walked in her walker when we got to our destination. Old Quebec is quiet, safe and family-friendly, so we felt no qualms about leaving the stroller unattended on sidewalks so Chloe could use her walker inside places like the 350-year-old Cathedral-Basilica of Notre-Dame de Quebec. We also left the stroller outside restaurants, including Le Lapin Saute, which specializes in rabbit dishes, and the creperie Casse-Crepe Breton. Admittedly, we didn’t go into many shops, which were often separated from the sidewalk by a stone step or two and packed to the brim with shelves full of delicate knickknacks. This was for the best, though; Chloe saved us from spending our money on too many Quebec-themed dust collectors.

Beyond Old Quebec we found three nearby attractions that were both kid- and disability-friendly. The Aquarium du Quebec was incredibly accessible, with easy-to-access elevators, plenty of ramps, automatic doors and wide sidewalks linking several buildings and outdoor exhibits. We explored darkened chambers filled with psychedelically illuminated jellyfish; interactive touch tanks with stingrays, starfish and prickly urchins; and the huge “Awesome Ocean” exhibit, which has a walk-through glass tunnel tank that seemed to submerge us in an underwater world of serenely gliding fish. A sprawling outdoor playground overlooking the St. Lawrence was less accessible because of its sand-covered play surface but still doable and one of Chloe’s favorite stops.

The next day we drove 15 minutes out of downtown Quebec City to Chute Montmorency, a 275-foot waterfall that’s higher than Niagara Falls. We walked along a boardwalk toward a set of spiraling wooden steps leading to a suspension bridge that stretches over the falls. I stared up at the steps in frustration. There were no ramps in sight. We attempted to carry Chloe part of the way up, but it was too far. I was flummoxed and annoyed, so sure that the Web site said the park and bridge were wheelchair-accessible. It was only after we gave up and headed back toward the parking lot that I noticed a short, dusty footpath that stretched behind the Manoir Montmorency, a grand old manor house that’s now home to an information center and restaurant. The path bypassed the boardwalk and stairs altogether and led directly onto the suspension bridge. I felt a bit chagrined, but still excited, as we wheeled onto the bridge, which bounced slightly underfoot, and marveled at the roar of the gushing white water plunging down.

We also explored the Marche du Vieux-Port, or Old Port Market, an indoor marketplace where local artisans and farmers sell their food and wares. The market is at the edge of Bassin Louise just a few blocks outside the Old Quebec gates, and were Chloe not with us, it would have been a nice walk from the hotel. Instead, we opted to drive and park in a handicapped spot just outside the door. The sprawling market proved to be another place where Chloe happily and successfully used her walker to explore stalls selling flowers, nougat, foie gras, local honey, cheese curds and sweet, jewel-colored macarons. We happily and lazily ate our way through the market, enjoying not only its sights, sounds, smells and tastes, but also the freedom it afforded our little girl.

When it was time to drive home to New Hampshire a couple of days later, I couldn’t help thinking about how wonderful it had been to travel with Chloe. She relished everything, from saying “Bonjour!” to the hotel staff every morning, to sampling poutine, the famous Quebec dish of French fries, gravy and cheese curds. I loved watching her nervous excitement at the power of the surging waterfall and the smooth feeling of a stingray under her hand. In the face of such happiness and wonder, our logistical struggles with staircases and ramps seemed to fall away. Yes, traveling with her is trickier and slower. But it’s also a lot sweeter.