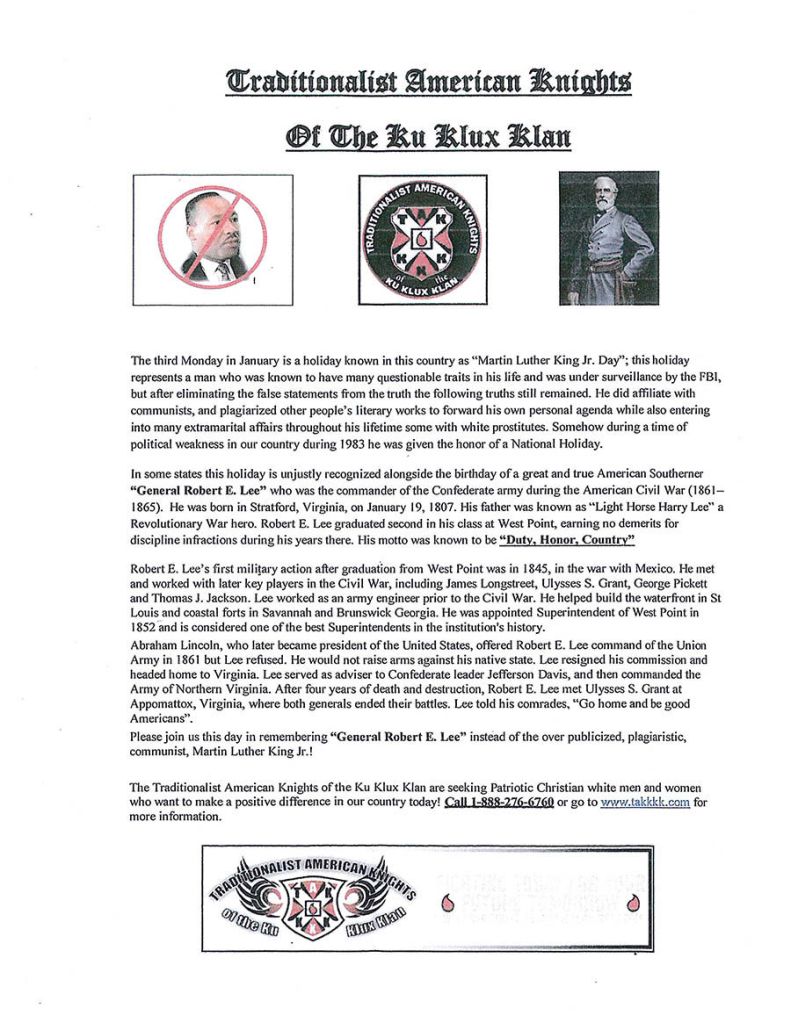 The leaflets carried the name of the Traditionalist American Knights of the Klu Klux Klan, an organization that describes itself as “Patriotic Christian white men and women who want to make a positive difference in our country today.”

The flyer questioned King’s character and worthiness of a national holiday, contending it “unjustly” recognized the civil rights leader on the very birthday of Lee, who commanded the Confederate Army of Virginia in the Civil War.

“Please join us this day in remembering General Robert E. Lee instead of the over publicized, plagiaristic, communist Martin Luther King Jr.,” the leaflets read. A phone number and web address solicited membership in the Klan group.

Capt. Steve Lemmings of the Pryor Police Department said officials were not aware of the group’s activity, but even if it had been, there was little it could do about the leafleting because of the First Amendment’s right to free speech.

“As citizens, as a police department, we cannot discriminate against any individual or group,” said Lemmings. “While I am not aware of any meetings or activities of the group in town, there is nothing prohibiting them from doing so.”

He said similar flyers were left on windshields of vehicles parked at a grocery store in Pryor 10 years ago, but there has been no other evidence of Klan activity since then.

General Lee’s birth date is on Jan. 19, coinciding with the national holiday honoring King, who was born on Jan. 15. Three southern states – Alabama, Arkansas and Mississippi – continue to designate Jan. 19 as a state holiday in honor of Lee.

The Klan group has a history of leafleting in mostly white communities. In December, the federal Court of Appeals for the 8th Circuit in St. Louis rejected the organization’s petition to overturn an ordinance banning such activity in Desloge, Mo., a community 60 miles southwest of St. Louis.

In the court petition the group gave a post office box in Park Hills, Mo., as its mailing address. Pryor, a town of 9,500, is located 50 miles northeast of Tulsa, Okla.

According to local historian Terry Lamar, the Klan was active in Mayes County in the 1920s, of which Pryor is the seat of government. He said the only documented case of violence occurred in 1922 “when a local white businessman in Pryor was kidnapped allegedly by Klansman, taken out west of town and beaten for having an adulterous affair.”

Lamar said Mayes County used to “have significant black population” at the time. The latest federal census shows it has shrunk to less than one percent. The white population is more than 70 percent.

Several Pryor residents decried the group’s leaflets on Facebook and other social media sites. One Facebook posting identified the leaflet sponsors as “a group of radicalized religious nut jobs who wear masks and have a violent history. I can’t believe that anyone (including OK state law enforcement) would tolerate this.”

Cydney Baron is a reporter for the Pryor, Okla., Daily Times.