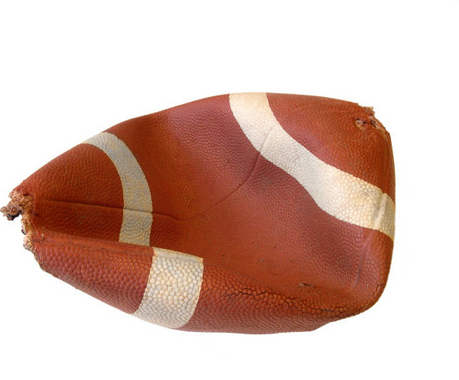 The Super Bowl hopes of the Indianapolis Colts were completely deflated Sunday night… maybe because the footballs used in the game were slightly underinflated?

According to ESPN, an NFL investigation has revealed that 11 out of the 12 game balls provided by the New England Patriots in Sunday’s rain-soaked AFC championship game against the Indianapolis Colts were not up to inflation regulation. The Patriots wound up winning the game 45-7.

Though the NFL has yet to comment on the growing controversy, Colts players are already crying foul on social media.

If New England was to be DQ’d.. We’d be their replacements right??… I should probably lay off these strawberry margs

@nfl So we get to play the game again or nah? ?

But does playing with an underinflated football actually give one team a competitive advantage over the other?

The consensus of a panel tackling the question for the NFL Network is, no, not really. However both Nate Burleson, a current free agent wide receiver, and fellow NFL Total Access analyst and Pro Football Hall of Famer Warren Sapp, agree that taking a pound or two of pressure out of a football–regulation inflation parameters are between 12.5 and 13.5 pounds per square inch–does slightly affect ball control, especially in wet weather.

“You’re going to be able to grip (the ball better),” Burleson said. “When it’s coming to a receiver, if there’s a little bit of air out of it, I’m going to be a little more amped to snatch it out of the air.”

However, as Sapp instantly countered, “both teams get the ball.”

“I think people at home are hearing this and saying ‘it’s almost like he [New England quarterback Tom Brady] is playing with a NERF ball. He can grab it and throw it as far as he wants,'” Burleson said. “That’s not the case.”