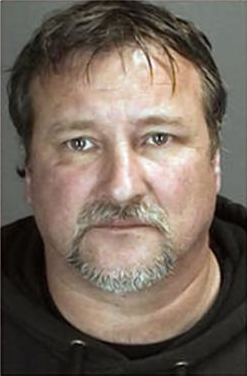 MIDDLETOWN, N.Y. — A man rented a bulldozer from a local construction company and used it to demolish the house he lived in with his wife, police in Orange County, New York said.

James Rhein, 48, of Middletown, was charged with criminal mischief and released on $300 bail after police found him throwing debris from the razed house into a dumpster.

Rhein’s wife, whose name is on the deed, did not know about the demolition and was not present when it happened, according to WNBC-TV.

“She was very upset,” Horn said. “She was in the middle of the road screaming, ‘her house, what happened to her house?'”

Rhein told the station that his wife was initially upset upon discovering what he had done.

He said the foundation of the couple’s home in Middletown, about 75 miles northwest of New York City, was crumbling from years of disrepair, and the rest of the structure was in dire need of renovation. He tried to get a permit to demolish it himself Monday but couldn’t because the office he needed to visit was closed due to the federal holiday.

Rhein added that he had tried to call his wife prior to the razing, but she didn’t answer her phone. He apparently notified local utility companies in advance, because electric, water and gas lines to the house were shut off.

Rhein is scheduled to appear again in Middletown City Court on Jan. 30.