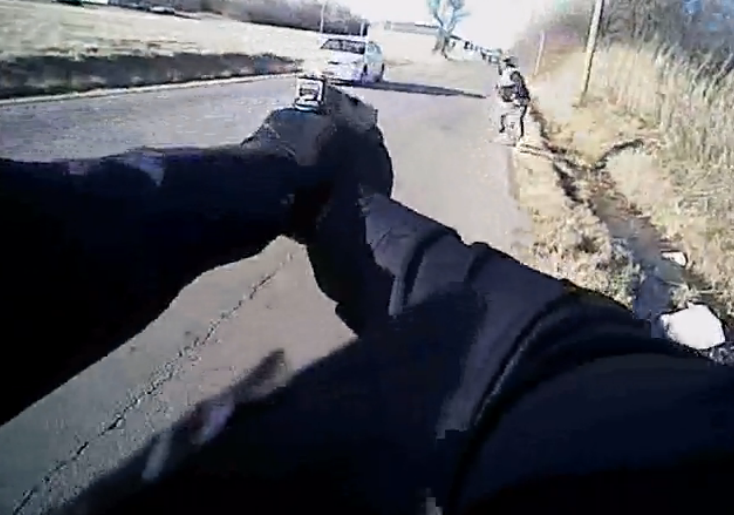 A portion of the video, which is graphic, can be viewed on muskogeephoenix.com.

Police were called to Old Agency Baptist Church after the ex-girlfriend of 21-year-old Terence D. Walker told Rev. A.H. Jones, the church’s pastor, that Walker was on his way to the church to shoot her and other attendees at a wedding.

The video shows Officer Chansey McMillin arriving at the church at approximately 4:20 p.m.

Walker, a former linebacker for the Bacone College football team, runs from McMillin while being frisked. While being chased, he appears to reach down to pick up an item and briefly turn toward the officer. McMillin then fires five shots at Walker, hitting him three times, and causing him to fall into a roadside ditch.

Muskogee police say the item Walker retrieved was a handgun, which they said they later found near Walker’s body after the shooting.

“The video clearly shows that the gun was recovered in very close proximity to the suspect and shows the hammer cocked and a bullet in the chamber,” the Muskogee Police Department said in a press release. “If the suspect were to have fired the gun, the bullet would have been fired in the direction of the officer, multiple bystanders, and toward the direction of oncoming traffic and a residential area.”

Later in the video, a man identifying himself as the church’s pastor who repeatedly asked to check on Walker immediately after the shooting, tells officers that McMillin “followed procedures … he did everything right.”

The Muskogee Phoenix contributed to this report.