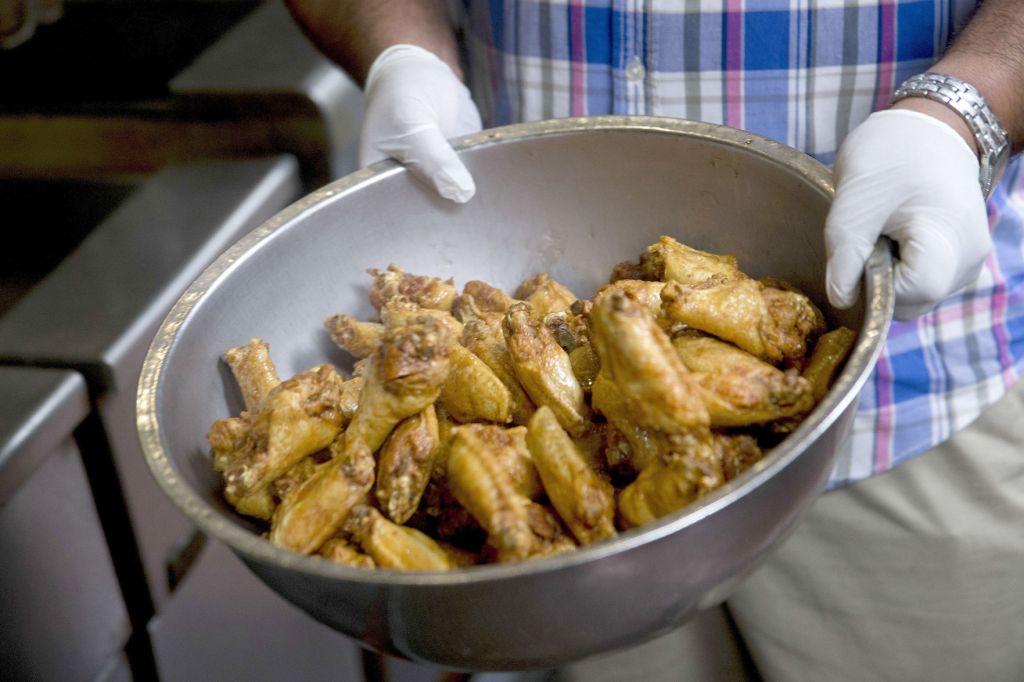 CHICAGO – On Super Bowl Sunday, expect two things when your order of chicken wings arrives: They’ll be fat, and they’ll be pricey.

First the fat part. American farmers are giving their chickens extra feed, taking advantage of plunging corn and soybean costs to help lift poultry production – as measured by weight – to a record.

But each chicken, of course, still only has two wings, regardless of its size. And the number of actual chickens slaughtered last year fell, causing a drop of about 50 million wings, government data show. That smaller supply is what’s triggering the pricey part of the equation. The cost of wholesale wings sold by processors in Georgia, which sets the benchmark for the nation, has surged 8.2 percent this month to $1.715 a pound, the biggest jump to start a year since 2012.

“Wings are just all over menus,” Darren Tristano, executive vice president at Chicago-based research firm Technomic Inc., said in a telephone interview Jan. 22. Demand for wings remains “very high with consumers because they’re customizable,” he said. “There’s a health halo around it, because it’s chicken. There are a lot of flavor profiles, and it’s a fun finger food.”

Buffalo Wild Wings Inc., a Minneapolis-based restaurant chain with more than 1,000 stores, raised menu prices by an average of 3 percent in November, Chief Operating Officer Jim Schmidt said in telephone interview Jan. 21. The company normally would have raised prices in February, but made the increases earlier partly because of higher wing costs, he said.

Chicken output will rise 2.7 percent from 2014’s record to an all-time high of 39.21 billion pounds this year, the Department of Agriculture estimates. Still, fewer birds slaughtered means that wholesale-wing prices are up more than 30 percent from a year earlier.

Americans paid 9.2 percent more for meat last year, the biggest jump of any food group, USDA data show. The gains were led by increases for beef and veal amid shrinking cattle herds, and that advance helped support prices for other proteins as consumers sought cheaper alternatives to record costs for steaks.

“It’s a good thing the Super Bowl pastime is chicken wings and not hamburgers,” said Andy Wiederhorn, chief executive officer of the Beverly Hills, California-based Buffalo’s Cafe, where a pound of wings costs about 5 percent to 10 percent more than this time last year at its 50 locations in the U.S. and Canada. “The prices have been generally reasonable, unlike beef prices, which have skyrocketed to record highs.”

The Super Bowl, which will pit the Seattle Seahawks against the New England Patriots this year, marks the country’s No. 1 wing-eating day. Demand peaks in the first quarter of the year, with consumption also high for the National Collegiate Athletic Association basketball tournament games.

An increase in restaurants serving wings is also supporting prices. The number of U.S. chicken-wing franchises grew 7 percent to more than 2,000 restaurants in the five years through 2013, according to Arlington, Virginia-based franchise researcher FRANdata. Demand for the meat is also rising as pizza chains including Pizza Hut and Little Caesar’s serve wings, Technomic’s Tristano said.

“You’ve seen an increase of all these different companies popping up that have wings on their menu, and it’s causing the market to react accordingly,” Michael O’Shaugnessy, senior vice president of Urner Barry, a food-industry publisher in Bayville, New Jersey, said in a telephone interview Jan. 22. “It’s just grown in popularity, and it’s a comfort food: people like to chew on a bone.”