Texas man arrested after posting about warrants on Facebook 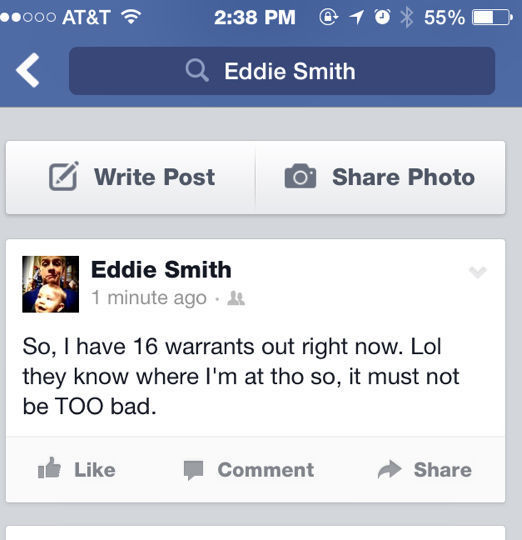 A Texas man seemed to be taunting local authorities via social media with a brazen post about having 16 outstanding warrants.

“So I have 16 warrants right now. Lol they know where I’m at tho, so it must not be TOO bad” was the Facebook status Mineral Wells, Texas resident Eddie Smith posted to his Facebook page.

It got back to police, and 22-year-old Edward Glen Smith was soon in custody. He was arrested Jan. 20 after local police verified he had 14 outstanding city warrants.

The next day, the Mineral Wells Police Officers Association posted to their Facebook page: “In the ‘you can’t make this up’ file, a subject posted on Facebook that they had a bunch of Mineral Wells PD warrants but we couldn’t do anything because they don’t live in the city limits … then we show up and arrest them on 16 warrants.”

Smith was arrested at a residence after police said they received a phone call regarding his location.

Taking it all in stride, Smith told the Mineral Wells Index, via Facebook messaging, he was glad to be putting it behind him.

“Lol Yeah. I made a mistake I know. I learned my lesson,” he wrote. “At least it’s a hurdle I’m jumped over because it could’ve caught me at a much more tender spot in my life in the future. It’s done. It’s over with. I got what I asked for.”

Smith said he is glad he wasn’t pulled over and arrested while driving with his son in the car.

“It’s never a good time to go to jail. … But, what if I had been driving with my son and gotten pulled over? I didn’t even know I had the warrants until I posted the status,” Smith wrote. “This is a minor set back for a major comeback for me. And I’m fine with that.”

Smith made a plan to pay off the fines and was released from jail.