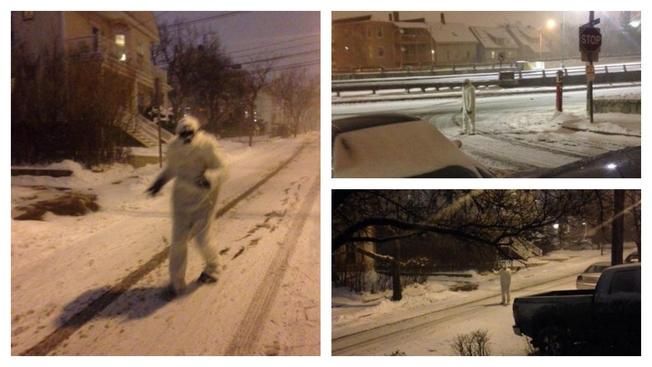 Boston’s overnight low? A person tromping through the snow in a yeti costume. And with a Twitter account.

In the absence of the apocalyptic headlines anticipated in Monday’s buildup to what New Englanders were told would be a historic sequel to 2014’s Snowmageddon, the Boston Yeti has social media by storm, as it were.

The blurry, viral photo of the cartoonish cryptid stalking the streets of Boston’s Somerville suburb first hit the Internet via @BostonYeti2015‘s very first tweet at 7:48 PM EST. An identical tweet was then put to the attention of NECN (New England Cable News) weekend anchor Latoyia Edwards. Edwards retweeted it. The rest is hashtag history.

Within hours, Boston Yeti sightings–it was apparently trying to hail a cab on McGrath Highway–were being covered by ABC News, USA Today, and other major media outlets, NECN included. By morning, the abominable Twitter account had amassed nearly 3,000 followers.

Like other popular animal-on-the-loose novelty Twitter accounts, @BostonYeti2015 took off by hijacking the hashtags of an existing news event: #blizzardof2015. However, unlike the recently recaptured goat from nearby Lowell, Massachusetts, which not only inspired a Twitter account but a parody of the popular podcast “Serial”, or 2011’s Bronx Zoo Cobra phenomenon, the Boston Yeti essentially created its own story. The stunt worked.

All that’s left now is an Animal Planet special.