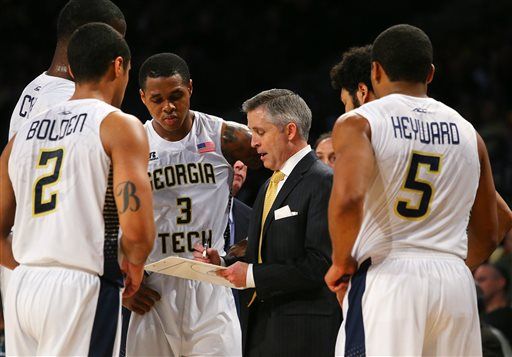 Georgia Tech, which plays at Miami on Wednesday night, has only one winning conference record in the last 19 seasons.

Asked what he tells fans who ask if Gregory can turn the program around, athletic director Mike Bobinski said Sunday, “It’s impossible to answer that question and not box anyone into a corner or give disingenuous answers. I choose not to answer those questions.”

The dismal ACC start has left the Yellow Jackets 9-10 overall. And six of their seven ACC losses have been seven points or less. Fans can see that trend as evidence the team is competitive — or that it can’t win the close games.

Bobinski said the team needs “a breakthrough” and he’s still hopeful the turnaround can come this season.

“The appearance to me is a team that’s shackled,” he said. “It’s just not fluid. … I’d like to believe we can enjoy some greater success and put ourselves into position where we can go into the next offseason on a positive note. But that remains to be seen. I’m hopeful and I believe that can happen but I also understand that we’ll see that unfold or not as the year moves on.”

Tech fans have seen a lot of losing under Gregory, especially in the conference.

Georgia Tech is still paying for Hewitt’s generous buyout clause — $7.2 million over five years when he was fired in 2011. Gregory’s contract runs through the 2017-18 season.

A decline in attendance hurt Hewitt. Poor turnouts also could prove difficult for Gregory to overcome. The attendance for Sunday’s 64-62 loss to Boston College was 5,587, leaving about 3,000 empty seats. Attendance was over 7,000 for recent home games against Syracuse and Notre Dame.

That was a subject Bobinski had no qualms addressing.

He said “it’s extremely important” for basketball, as well as football, to produce revenue.

“You miss on one of those and you’re really handcuffing yourself in some ways,” he said. “It does matter. It’s important to us.”

It’s a line the Yellow Jackets need to find a way to cross.

Boston College was winless in the ACC before beating the Yellow Jackets. Wake Forest’s only ACC win came against Georgia Tech on Jan. 10.

The one lopsided defeat was a 57-28 loss at No. 2 Virginia on Thursday night. It was the fewest points for any ACC team in the shot-clock era and Georgia Tech’s low total since 1947.

New Orleans Saints’ Jimmy Graham celebrates after scoring a touchdown during the second half of the NFL Football Pro Bowl... read more