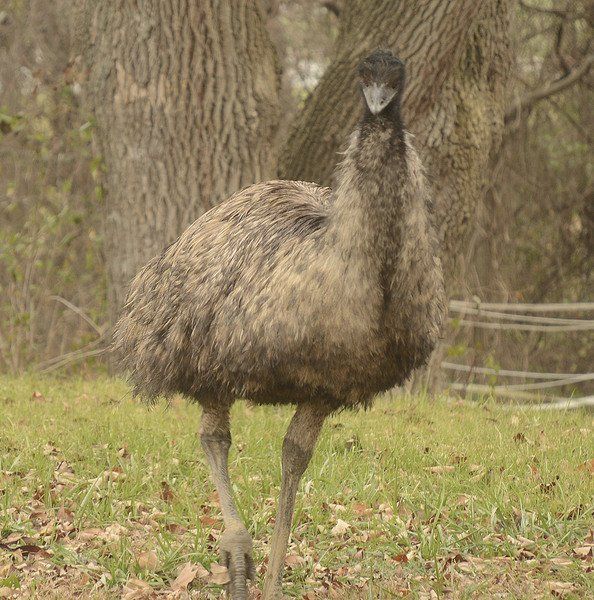 WASHINGTON, Ind. — Motorists driving along State Road 57 north of Washington, Indiana, have done double takes while driving past the residence of Shirley McCafferty.

McCafferty has a pet that has become a local celebrity of sorts: a 75-pound emu that has become more adventurous as it has grown. The emu, named BoBo, has drawn unwanted attention from local police, however, after his most recent escapades.

Twice within the last week, police have received calls complaining about the animal wandering into the roadway, and one caller said that his vehicle had been pecked by the animal, according to a Daviess County Sheriff’s Department report.

McCafferty says BoBo loves people and doesn’t believe the animal would hurt anyone.

“He will peck, but it’s not a hard peck,” McCafferty told the Washington Times Herald. “His beak is hollow, not like a chicken. He has a light beak and he isn’t carnivorous. I’ve never seen him hurt anyone. He might peck a little hard, but it’s kind of like a pinch.”

Emus are indigenous to Australia, New Guinea, Indonesia, the Solomon Islands, and the Philippines, but McCafferty met BoBo at a local auction center two years ago. The bird stands about 6 feet tall and has a 7-inch wingspan. McCafferty originally brought BoBo home with a sibling, but that bird drowned in its water dish.

She said BoBo soon became lonely, but was comforted by his owner’s other animals, including dogs, cats, swans and a horse named Red.

“I had a chicken house with a fence and gated door outside. I put him in there and he was happy,” she said. “The cats would come down and play. Then I noticed the horse was over there a lot. One time I looked and BoBo was out with the horse. I left him out because I couldn’t fix the gate. They ran around the pond and had more fun. They’d race and go in the woods to play.”

But as BoBo is frequently lured toward the road with the promise of treats, McCafferty said she plans to purchase a 4-foot high fence in hopes of containing her pet. She added she is also working to train her dogs to keep an eye on the bird.