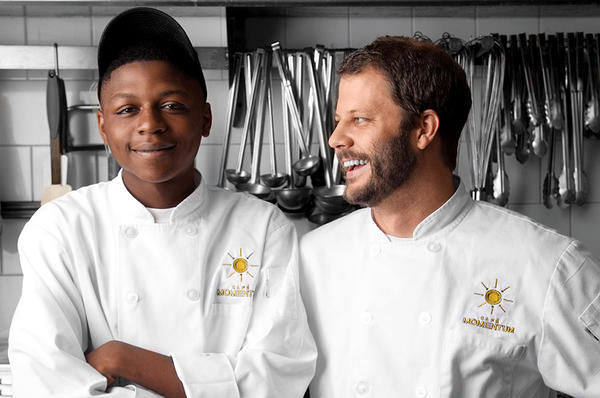 The joke is that Chad Houser takes kids out of jail and teaches them to play with knives and fire. But it’s true.

Dallas’ culinary community has given every indication it will flock to Thursday night’s grand opening of the acclaimed Dallas chef’s new restaurant to enjoy octopus, pork loin and caviar prepared by teenage boys and young men who have served time in a local juvenile detention facility.

In fact, if you haven’t had a run-in with the law, your chances of getting a job at Café Momentum are pretty slim. The restaurant’s staff is comprised almost entirely of nonviolent juvenile offenders recently released from Dallas County Youth Village.

It’s the first restaurant of its kind in the country. Houser was told it couldn’t be done–the kids wouldn’t show up, and if they did, they’d never develop the skills necessary to prepare anything close to haute cuisine.

“If I had a nickel for every time I’ve been told no, or that it will never work, I’d have a restaurant open in every state,” Houser says in a video posted to the About section of CafeMomentum.org.

Houser has actually been testing the waters of his restaurant-based approach for fighting youthful offender recidivism for more than three years (under the Café Momentum banner) by hosting Sunday night “pop-up meals” at various restaurants in and around Dallas. Taking his time, he says, has allowed him not only to raise enough money to open an actual brick-and-mortar restaurant, but to align the nonprofit venture’s approach to its ultimate purpose.

“That was where the original idea behind Café Momentum came about,” Houser says. “How do we continue to work with these kids specifically once they’re released and go back to… the same dysfunction and issues that eventually led them on a path of crime and to jail. That’s where we decided to just open a restaurant and let these kids run it.”

Houser says that by doing so, participants aren’t just making a living–each “intern” in the one-year program earns $10 per hour–they’re learning life skills (in a Mr. Miyagi wax on-wax off kind of way).

Houser says interns are evaluated by how effectively they apply not only the kitchen, but the social skills applicable in each of the eatery’s five work stations.

“It’s a system of reward rather than a system of punishment,” he says. And it seems to be working.

Houser says the recidivism rate for juvenile offenders in the state of Texas is 47 percent “which means that when a kid walks out of jail, you can flip a coin to determine whether or not they’ll be back in a year.”

“That’s almost $130 million dollars in deferred lifetime savings from keeping them away from being career criminals,” he says. “Think about all the lives that could be changed, all the good that could be done in this community with that money.”

Not to mention all the good food.