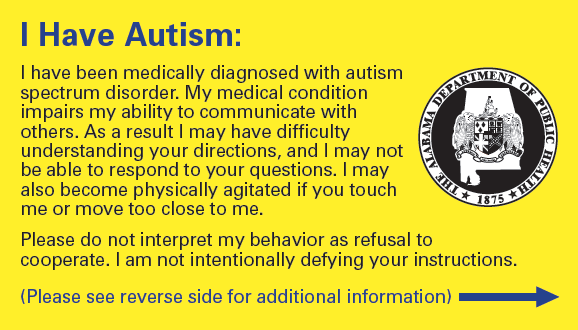 MONTGOMERY, Alabama — Alabama residents diagnosed with autism will soon be able to receive a helping hand that can fit in their wallets.

The state health department will soon provide identification cards for Alabama drivers who have been diagnosed with autism disorders, reports say. Melanie Jones, executive director for the Autism Society of Alabama, said these cards would be issued to people diagnosed with autism to help clear up any confusion there could be when dealing with police or emergency personnel.

Bama Hager, Policy and Program Director for the Autism Society of Alabama, said the cards will be similar to ones that state a person has been medically diagnosed with autism spectrum disorder and that their medical condition impairs that person’s ability to communicate with others.

According to Hager, individuals with autism can become frustrated and overwhelmed during traffic stops because of a sensory overload and could have a difficult time communicating verbally what’s wrong, which can sometimes be misinterpreted by officers as being impaired or under the influence.

“We kept hearing that story and I think that it’s not somebody looks like they’re impaired if they have autism; I think it might be that processing time,” said Hager. “For somebody with autism that slower processing time might look as if there’s some substance on board.”

Following a perceived need for such identification, the Alabama Legislature passed a law in 2013 to develop the unique identification cards to be used in tandem with a state driver’s license. The law went into effect on Jan. 1, and Alabama is one of the first states to sign such identification into law. The card will also have contact information on the back so authorities can contact family members as needed.

Senator Arthur Orr (R) of Decatur, Ala., who supports the distribution of the ID cards to autistic drivers, says they should be ready in March. As with general state ID cards, drivers affected by autism will have to apply before they can receive one.

While the cards are being marketed toward state drivers with autism disorders, children and adolescents diagnosed with autism may also benefit from carrying an identification card explaining their condition.

Noted in the Center for Disease Control’s 2014 Community Report on Autism, 1 in 175 children in Alabama was identified with Autism Spector Disorder (ASD), with the national average identifying 1 in 68 children diagnosed.

In March, individuals can apply for the cards via the Alabama Health Department and obtain one for $10.