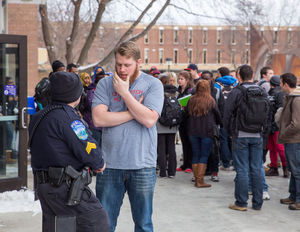 A student at Minnesota State University in Mankato died after shooting himself in the presence of other students on the second floor of a campus library Monday afternoon.

An MSU student named Josh, who didn’t give his last name, told the Mankato Free Press he was 5 to 10 feet away from Anderson when Anderson shot himself. He said police arrived within seconds.

The Mankato Department of Public Safety received reports at 3:52 p.m. that a man on campus had a gun and was possibly suicidal. After arriving on the scene and setting up a perimeter, officers found the man in the university’s library at 4:30 p.m., according to Public Safety officials. At that point, Anderson turned a gun on himself, officials said.

Students and staff were immediately evacuated from the area. They lingered outside and in the university’s student union, watching as police surrounded the building.

University officials sent out a message via the university’s emergency alert system at about 5:15 p.m. telling students that they were in no immediate danger.

The library was partially reopened an hour later. Students were allowed to access the lower level, first floor and third floor, while portions of the second floor remained closed.

Students Garret Fitzsimmons and Kayla Kermode were on the second floor when the incident occurred. They said they didn’t hear anything except for police ordering students and library staff to evacuate the building within 30 seconds.

The university is offering counseling to students affected by the incident.