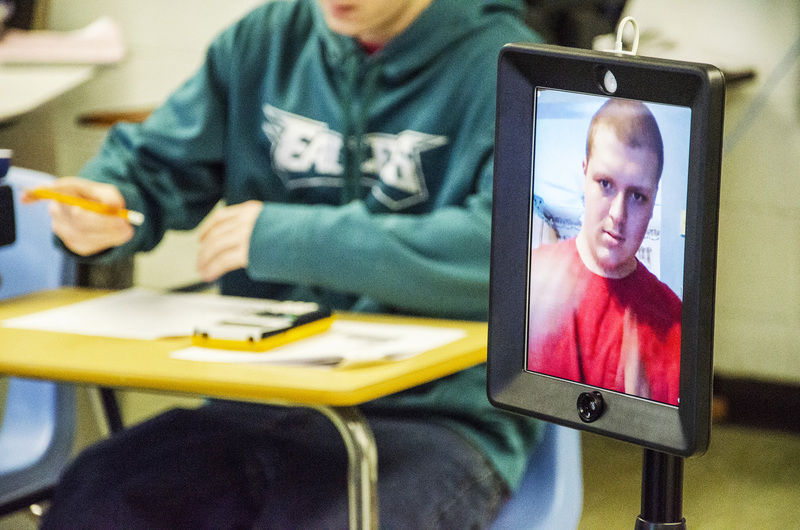 A Pennsylvania teen went back to class last Monday without setting foot inside the school. He won’t be able to do that until his broken leg heals.

Cole Fritz, who was injured in a Jan. 7 traffic accident, was at home operating a robot that was standing in for him – rolling, actually – and enabling the 16-year-old to interact with his teachers and classmates at Commodore Perry High School. They could hear and see each other, thanks to the segway-style robot linked wirelessly over the Internet.

“I never thought I’d say this,” Fritz said Thursday to his first-period classmates who saw his face on the screen of an iPad mounted to the robot. “I miss school.”

“Yeah, right,” a couple of them replied.

From his Sandy Creek Township, Pennsylvania home about a mile away, Fritz was using four keys of his computer keyboard to direct the robot around the classroom.

Between classes, he sent the robot through the hallway, where other students waved and smiled, knowing that Fritz could see them on his computer screen. Tony McKinley, a retired state trooper who works as the school’s security guard, carried the robot up the stairs to Fritz’s literature class.

Fritz is the first student among the districts served by the intermediate unit to use one to attend class. The cost to lease the robot, $275 a month, is affordable even for smaller school districts like Commodore Perry, Zippie said.

“We saw a demonstration a few months ago and it was the first thing I thought of when we knew Cole would need services as a homebound student,” she said. “It’s not going to be right for every homebound student but it’s a perfect fit for him. He’s a member of our technology team.”

Fritz is expected to return to school in the flesh in early March.