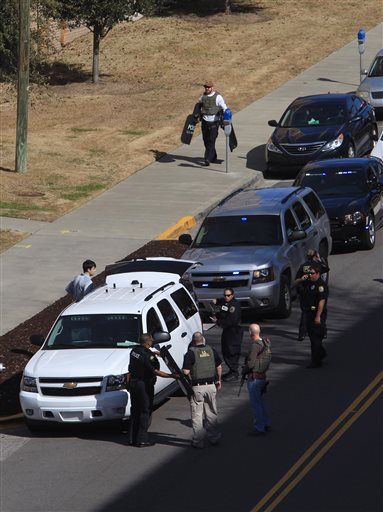 COLUMBIA, S.C. (AP) — The University of South Carolina said shots were fired at its new School of Public Health in a busy section of downtown Columbia on Thursday afternoon.

The school issued two alerts on the shooting via its emergency system and Twitter directing people to seek shelter and remain indoors.

There was no immediate word on injuries or suspects.

Student Hayden Dunn, a senior from Myrtle Beach, said he was in the building about 1 p.m., getting in an elevator to change classes, when a police officer also got inside. Dunn said the officer asked whether anyone had heard gunshots, but they hadn’t. Dunn said he went to class, then an alarm sounded five minutes later, and people rushed outside. Another officer told him shots had been fired, he said.

“Otherwise, you wouldn’t have known anything happened,” Dunn said.

Some roads were blocked in the immediate area Thursday, but students still walked around campus, along with some vehicles that drove where they could.

A school spokesman would not immediately comment on the shooting, which happened a couple of blocks from the Statehouse and two blocks from the university’s basketball arena. The street is one of the city’s busiest. Sirens could be heard as more police officers arrived at the public health building.