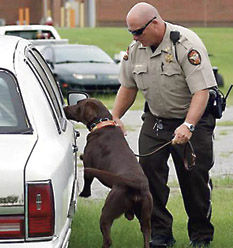 Armor Express of Central Lake, Mich., has an incentive program for every 15 vests purchased by the charity, a free vest is awarded. Vests were donated to K9s in Illinois, Iowa, Texas and Georgia. Vested Interest in K9s Inc. is a 501c (3) charity located in East Taunton, Mass., whose mission is to provide bullet and stab protective vests for law enforcement dogs throughout the United States.

Each vest costs $950 and has a five-year warranty. The non-profit was established in 2009, to assist law enforcement agencies with this potentially lifesaving body armor for their four-legged K9 officers.

Through private and corporate sponsorships, Vested Interest in K9s Inc. has provided over 1,223 law enforcement dogs with protective vests since their inception in August 2009. Over $1.1 million has been donated for K9 vests in 40 states including Alaska and Hawaii.

The Sumter County Sheriff’s Office is very proud of the hard work and dedication that Ciani and Max have brought to the department.