Can we bring back the woolly mammoth? 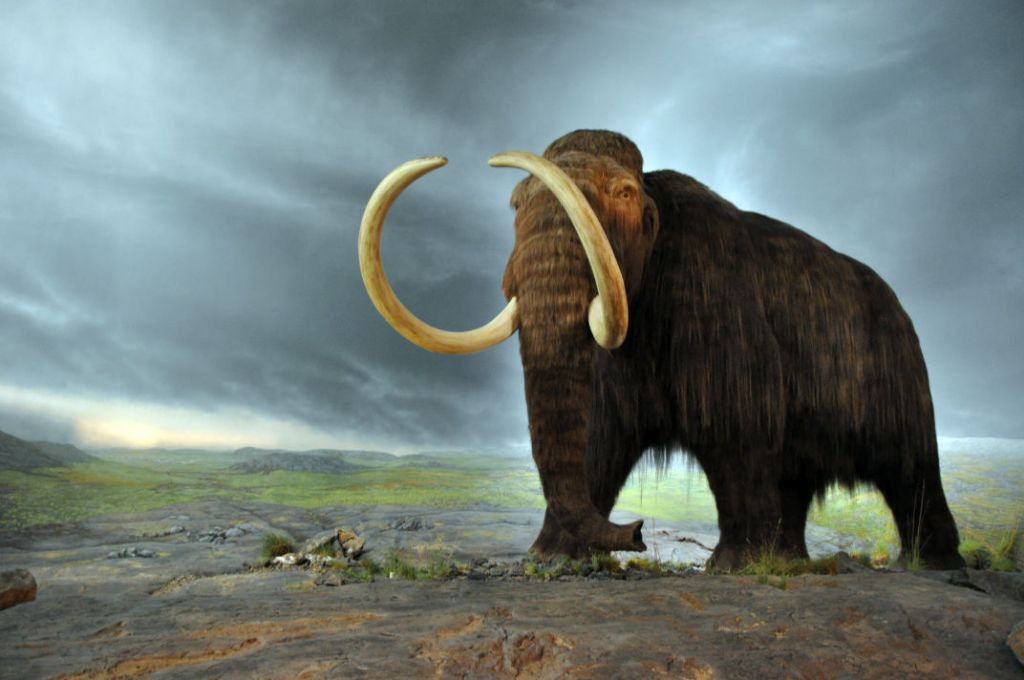 When Dolly the sheep was cloned from the mammary cell of a Finn-Dorset sheep in 1996, the public imagined growing identical copies of all sorts of animals. The process, known as somatic cloning, tempted us with the idea that if we could obtain just a single working nucleus from any cell, we could reproduce the entire animal.

Scientists’ minds jumped quickly to woolly mammoths, which became extinct 4,000 years ago. The frozen carcasses that occasionally emerge from the Earth’s melting permafrost offer a trove of well-preserved soft tissue and hair. The University of Pennsylvania has made major progress reconstructing the mammoth’s genome. Two groups of scientists have announced plans to clone the mammoth. They’re pursuing cloning to broaden our scientific understanding of the animals and hoping that putting mammoths back into certain Arctic habitats could help those ecosystems to function better after the relatively brief interval since they disappeared.

Frozen mammoths appear to provide all of the raw material necessary for rebuilding a living animal. In some cases, entire organs are intact. Blood, eyes and digestive matter have been found. But this isn’t the same as having well-preserved tissue on a cellular and molecular level.

Some groups of scientists, including one led by Akira Iritani of Kyoto University and another at South Korea’s Sooam Biotech Research Center (in partnership with Russia’s North-Eastern Federal University) hope to extract functional cells from a frozen mammoth and use the genetic material in those cells to begin cloning.

Unless an organism contains some type of antifreeze, the freezing process tends to destroy cells. A steak in your freezer may look like a perfect slab of muscle and fat, but if you were to look at it under a microscope, you would see that as water within the tissue freezes, it expands and tears apart cell walls and other fine structures. Attempts at somatic cloning of mammalian cells that have been frozen for years have failed, with one possible exception.

Researchers at Japan’s Riken Center for Developmental Biology claimed in 2008 that they had cloned mice from the brain cells of animals that had been frozen for 16 years. However, according to Teruhiko Wakayama, who conducted most of that work, no other laboratory has replicated those supposed results. If an extraordinary scientific claim cannot be replicated, that can be a warning sign that the research may have been flawed.

There is a substantial difference between 16 years ago and the Pleistocene epoch. Freezing a body does not halt change or decay. Enzymes in animals’ bodies normally begin breaking down tissue soon after death. This enzyme activity isn’t gentle on cell structures, but it is what makes aged beef more tender.

Freezing dramatically slows the action of these enzymes, but it does not stop it entirely. You probably wouldn’t notice a steak’s getting more tender after a year in the freezer. Give it a few thousand years, though, and the texture may improve. The cumulative effects of normal background radiation also gradually damages the DNA in frozen tissue.

George Church doesn’t believe that the viable cells or nuclei sought by the Japanese and South Korean teams will be found in any frozen mammoth. A professor of genetics at Harvard Medical School and a vocal advocate for bringing extinct animals back to life, Church thinks that the route to a mammoth will have to be found elsewhere.

“Ten thousand years of radiation. In a frozen specimen that has no metabolism going on, it’s accumulating and breaking into bits,” he said. “That DNA will never function again. Their goal is a mammoth. Our goal is testing genes.”

Skepticism about the cloning projects may be warranted. The Sooam Biotech Research Center is led by Hwang Woo-suk, a scientist who was first lauded for his breakthrough work in somatic cloning, including creating the world’s first cloned dog – a service that the center advertises on its Web site.

In 2009, he was convicted of fraud for faking research into the cloning of human stem cells. Yoshiki Sasai, deputy director of the Riken Center, was embroiled in a similar fraud case and was found last summer to have failed to exercise oversight over Riken Center researchers who faked stem cell research. He committed suicide in August.

Church’s efforts at Harvard appear more modest than the South Korean and Japanese projects. He hopes to identify mammoth genes associated with adaptation to cold weather and insert them into the nuclei of elephant cells. In fact, he asserts that this has already taken place.

“We have functioning elephant cells with mammoth DNA in them right now,” Church said in an e-mail. “No failures so far as I know . . . We have CRISPR [a method of genetic manipulation] working in elephant cells and have made 14 changes in the genome fairly easily so far. Focusing on cold-resistance initially (blood, subcutaneous fat, woolly hair and external ear size).”

However, Church has not published this research in a journal. It is unusual for a scientist to publicly make such an extraordinary claim without providing evidence that can be evaluated for accuracy by their peers.

Others are taking a different route. By reconstructing the mammoth genome through a mosaic of samples, scientists might be able to engineer a cell nucleus and then use the somatic cloning method that led to Dolly the sheep.

What scientists have been able to get out of frozen mammoths is partial DNA. No single cell has given up a complete genome on its own, but by analyzing different samples from various mammoths, scientists with Pennsylvania State University’s Mammoth Genome Project appear close to publishing a complete woolly mammoth genome. In a separate effort, Kevin Campbell of the University of Manitoba has used a fragment of DNA to replicate the oxygen-bearing hemoglobin that mammoths used to make.

The best source of mammoth DNA has not been the famed soft-tissue remnants but rather the hair. Each hair cell contains a complete genome encased in a protective coating.

Mammoths, like humans, were full of bacteria and viruses. The digestive tracts of the specimens that have been unearthed are filled with genetic material from plants they were eating. Contemporary and modern pollen may have dropped onto them. A frozen mammoth contains a lot of DNA other than mammoth DNA.

Part of the challenge of reconstructing the mammoth’s genome has been sorting out this contamination. Scientists can wash and bleach mammoth hair in a manner not unlike the methods used by a good hairdresser. It is comparatively easy to remove contaminating DNA from hair as opposed to other cell types.

Packing an artificially reconstructed genome into the nucleus of a mammal’s cell and making it function has never been done, and it would be a feat worthy of a Nobel Prize. With enough time and money, it may be possible to use a polymerase chain reaction (a way of copying small parts of DNA) to make millions of copies of Penn State’s genome and place them into a modern elephant’s living cell. Then scientists could prompt cell division and start growing a line of woolly mammoth cells. If they got that far, it isn’t a stretch to suggest that they could fuse nuclei from those cells into elephant egg cells, stimulate them with an electrical current and start making blastocysts (very early-stage embryos), in much the same way that Dolly the sheep and many other mammals have been cloned.

But let’s not get too excited yet. Because from this point on, we won’t just be dealing with laboratories and cell lines. This is the part where living elephants need to cooperate.

But “adequate” does not mean “works the first time.” This is where arguably the biggest hurdle to making a modern mammoth lies. Scientists would probably need quite a lot of elephants to get one that manages to carry a mammoth calf to full term.

Working with elephants is not as simple as working with lab mice. Researchers can harvest thousands of egg cells from mice without difficulty. They can attempt to impregnate hundreds of mice and accept failures among most of them. This won’t translate well to elephants.

John Engelhardt, chair of anatomy and cell biology at the University of Iowa Carver College of Medicine, was among the authors of a paper in 2007 detailing his team’s success at producing the world’s first somatically cloned ferrets. The paper, published in the journal Developmental Biology, describes transfers of embryos into 30 ferret surrogates. It built on a previous attempt that had involved 19 surrogates. In other words, 49 surrogates were required to make the first pair of cloned ferrets.

According to Dennis Schmitt, a professor of veterinary science at Southwest Missouri State University and global specialist in elephant reproductive health, there are probably not enough captive Asian elephants of breeding age left to create a suitable pool of surrogate mothers. Assuming that as few as 20 elephants were to be used in a mammoth program, efforts to breed more Asian elephants for conservation would probably be derailed.

“You’re talking half,” Schmitt said in a phone conversation.

“Currently, 40 elephants are in the [North American captive] breeding population. Half of the effective female breeding population in that scenario would be essentially removed for that time period. Already we’re at a critical level in terms of maintaining a population in North America. You would be talking about putting an embryo in – you have to use a female who had already had a calf if you aren’t going to do it surgically. Elephants have a hymen before they have a calf. There are too many challenges to begin with without doing abdominal surgery in elephants without a specific medical reason.”

Attempts at breeding captive elephants have been disappointing. Many have irregular cycles or never go into estrus, and artificial insemination usually fails. On the 27 occasions when the technique has resulted in pregnancy at American zoos, eight ended in miscarriages or stillbirths. Six more calves died soon after birth. Globally, only 45 Asian elephants were born in captivity in 2013 by either natural or artificial means.

Scientists don’t understand the reproductive cycles of elephants as well as they do those of rodents or livestock. But researching somatic cloning of mammoths with a small number of Asian elephants might enhance elephant conservation.

“To say that [somatic cloning] could never play a role would be a mistake,” Schmitt said. “There are ways that we could monitor and breed elephants for specific circumstances. We really don’t know the extent of inbreeding among wild populations of Asian elephants. That hasn’t been looked at very well. Somatic DNA modeling could be valuable in the future.”

Engelhardt pointed out another barrier to cloning mammoths. The new field of synthetic biology has not yet been able to build a self-replicating organism more complex than a single cell.

“Just to do that with a mouse – perfectly sequenced, create some computer database, synthesize the DNA and create it in some sort of enucleated cell and get that cell to retain and pass on its chromosomes, to carry out the most important steps to create a cell from synthetic DNA – [would be a major accomplishment]. Once that can be done on a mouse, then it’s feasible to think about it with extinct species. But to go straight forward with a woolly mammoth [from the genome] will be a mammoth effort.”

With so few breeding female elephants available, a de-extinction program for the woolly mammoth would first require that the numbers and breeding success of captive elephants be turned around. In the long run, the trouble with making a mammoth will not be the mammoth. It will be the elephant. Perhaps the future of more than one species is at stake.