SB&T donates to SGTC Instructor of the Year 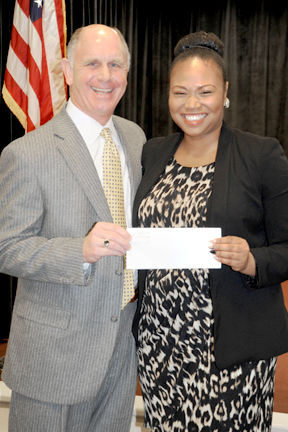 Sumter Bank and Trust City President and Americus Mayor Barry Blount presented a donation to the South Georgia Technical College Foundation on behalf of SB&T in support of the college’s 2015 Instructor of the Year program. He presented the stipend to Raven Payne at the college’s recent Instructor of the Year and GOAL (Georgia Occupational Award of Leadership) recognition ceremony. Payne was announced as this year’s winner by SGTC President Sparky Reeves.

President Reeves thanked SB&T for its support of this program. “We appreciate SB&T’s partnership with South Georgia Technical College and their continued support to the Instructor of the Year program,” said Reeves.

She is competing against the top instructors from each of the state’s technical colleges and a Board of Regents college with a technical division for the Rick Perkins Award for Excellence in Technical Instructors.