Why Jon Stewart and Brian Williams should just switch jobs 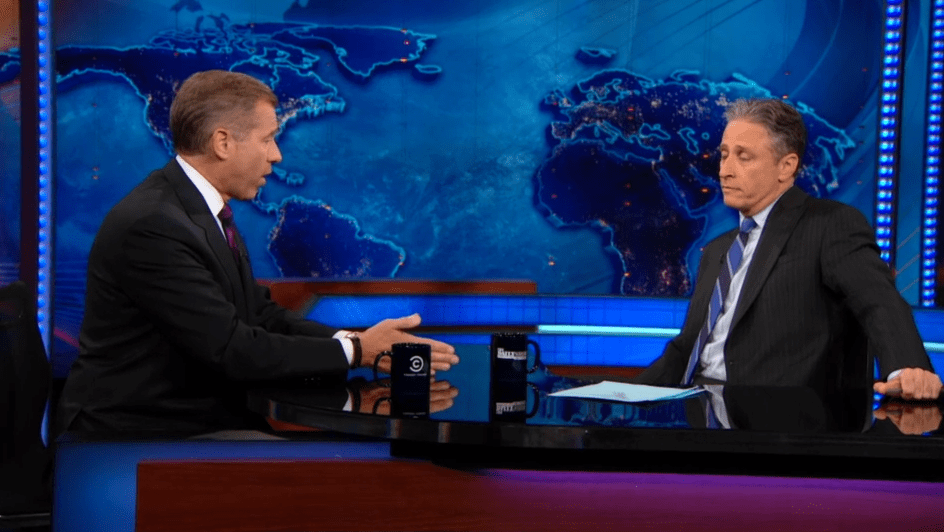 The first detonated around 7 p.m. EST. Comedy Central announced on Twitter that Jon Stewart, the longtime host of “The Daily Show,” will step down later this year after more than 16 years running the show. Then, less than an hour later, the Brian Williams bomb dropped. NBC dispatched a letter saying it had suspended its lead anchor, who weathered days of intense scrutiny following his admission he had cooked up a personal tale of Iraq bravery, for six months. Without pay.

It wasn’t long before the murmurs started – through Twitter, through Facebook, through the nether reaches of the Internet. They called for something that at first seemed totally insane but, as it sank in, began to make sense: Jon Stewart, now as much a newsman as a comedian, and Brian Williams, now as much a comedian as a newsman, should just switch chairs.

Let that marinate for a moment.

“Please raise your hand if you want Jon Stewart to replace Brian Williams at NBC?” wrote Steven Greenhouse of the New York Times. A Miami journalist then placed a fake Guardian story on Facebook under the headline, “Jon Stewart leaves The Daily Show to anchor NBC Nightly News following Brian Williams departure.” (Clicking on this link, however, led the reader to a Rick Astley video.) NPR’s Scott Simon had this to say: “I can’t be the first person to notice that Brian Williams & Jon Stewart both seem available in about 6 months.”

Even @TheTweetOfGod, with his 1.8 million followers, got into the mix. He offered: “Jon Stewart leaving. Brian Williams looking for work. It’s almost TOO obvious, isn’t it.”

@TheTweetOfGod has a point. Here’s why: Despite his protestations to the contrary, Stewart is not exclusively a comedian. His career has careened from procuring doobies in “Half Baked” to directing the substantive film, “Rosewater,” a sobering tale of a captured journalist in Iran. More and more, he has admitted he’s grown tired of comedy.

While promoting “Rosewater” last year, he told NPR that he loves his job as the host of “The Daily Show.” “That being said, I think there are moments when you realize that that’s not enough anymore, or maybe it’s time for some discomfort.” On Tuesday night he affirmed his restive spirit. “This show doesn’t deserve an even slightly restless host, and neither do you.”

Stewart has become as much a serious media man as anything else. (Remember, NBC reportedly offered him the plumb job of host of “Meet the Press.”) And most Americans agree. In 2008, Pew Research took a poll, asking which journalist they most admired. Stewart finished fourth. “Are Americans confused?” Pew asked in its release.

They weren’t. “The Daily Show closely resembles the news agenda of a number of cable news programs as well as talk radio,” Pew continued. “The program also makes heavy use of news footage, often in a documentary way that employs archival video to show contrast and contradiction, even if the purpose is satirical rather than reportorial.”

Another journalist finished right ahead of Stewart in the poll. It was Williams, who had already sat in NBC’s anchor chair for years, and was authoring a much quieter, but no less remarkable transition – the opposite of Stewart’s own. Williams was becoming a comedian.

“Brian Williams: The funniest guy in the room,” Esquire sang in 2005. “What do you do call a former fireman from Jersey with a surprisingly quirky wit and no college degree? Anchorman.” But this anchor had gifts of showmanship any other major anchor of the modern era. He could make ’em laugh. This ability arguably brought more celebrity than even his best journalism.

“I’m forever getting approached in airports by people who say, ‘I saw you on Jon Stewart,'” he commented in the Esquire article. “‘I didn’t know you …’ There’s an uncomfortable pause, and I feel compelled to take them off the hook and finish the sentence: ‘… had a personality at all?'”

As other anchors like Katie Couric foundered in a new media environment cluttered with the likes of John Olivers and Stephen Colberts, Williams’s mixture of sternness at the news podium and irreverence on David Letterman’s show made him unique. “Though his career in comedy may have started by happenstance, Williams has managed to stay in the conversation because he can speak in the vernacular of his new competition,” New York Magazine writer John Swansburg said.

Williams got spot after spot on “The Daily Show,” “Late Show with David Letterman” and “Late Night with Jimmy Fallon.” He acted in “30 Rock.” He did “Saturday Night Live.” He even lobbied NBC to give him Jay Leno’s chair at “The Tonight Show” a few years ago, as several outlets reported on Tuesday. “Brian wants to be a late-night comedian,” one former colleague told New York.

While lobbying, he exercised his comedic chops, dropping an epic bit on “Morning Joe” when he roasted the New York Times’ earnest, baffled coverage of Brooklyn.

“Once a day, there’s a story about all the riches offered in that borough,” Williams said as the other broadcasters cracked up. “There are young men and women wearing ironic glasses frames on the streets. There are open-air markets, like trading posts in the early Chippewa tribe, where you can make beads at home and then trade them for someone to come over and start a small fire in your apartment that you share with nine others. Artisanal cheeses, for sale on the streets of an entire American borough. It’s fascinating to watch the paper venture over the bridge. Venture through the tunnel. Go out to the outer reaches.”

This was very funny. And very accurate. It’s a combination that Jon Stewart is also pretty good at. So let’s honor Twitter God’s words: Let’s switch one for the other. As one Redditor pointed out: Williams has already “proven himself to be good at fake news.”