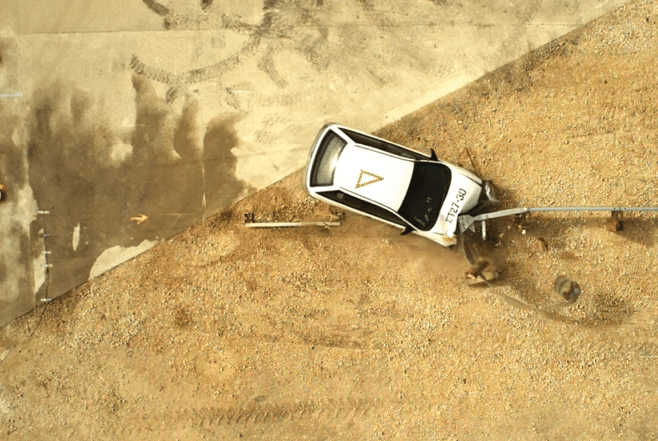 BOSTON – Controversial guardrails linked to deaths and injuries on the nation’s highways have passed at least four of eight federally ordered crash tests, but critics say the trials were rigged.

Federal highway officials say early results of tests conducted on the ET-Plus guardrails made by Trinity Highway Products show the devices meet testing criteria, including a requirement that the guardrails “not penetrate or show potential for penetrating” the passenger area of cars during a crash.

An independent consultant hired by the agency confirmed those results. Highway officials say they need to further review the data before issuing a report.

“These crash tests are not the end of our work to determine the safety of this device,” said Gregory Nadeau, acting administrator of the Federal Highway Administration, in a statement. “We’ve said from day one that, when it came to testing, we weren’t going to do this one task, check a box and be done with it.”

The Trinity guardrails, which are installed along most Massachusetts highways, came under federal scrutiny last year following a multi-million dollar verdict by a Texas jury that the company failed to disclose design changes related to the failure of the guardrails’ shock-absorbing end caps.

The yellow and black, striped end terminals — installed at the end of a length of guardrail — are designed to act like shock absorbers when hit by a crashing car, pushing away the metal guardrails and lessening the impact. Lawyers behind the lawsuit in Texas, where Trinity is based, say the modified guardrails instead “lock up” and puncture vehicles.

Massachusetts is one of 42 states – including Vermont, New Hampshire and Connecticut – that stopped using the guardrails pending the federally ordered tests. Virginia officials ordered them removed from their highways and are expected to sue to recoup their losses.

Rick Davenport, a spokesman for Texas A&M Transportation Institute, which originally designed the guardrail, trumpeted the results of the federal crash tests as proof that the guardrails are a “safe, effective roadside safety product.”

“It should be especially noted that in each of the eight tests, no guardrail speared the cabin of the vehicle, nor did any vehicle roll over — two key measures in determining success in such testing,” he said. “It is equally important to note that the guardrail did not jam upon impact.”

But Sean Kane, president of Safety Research and Strategies Inc., a Rehoboth company that specializes in product safety, said the tests were “rigged” because they used straight-on impacts as opposed to situations where cars obliquely struck the guardrails, which he and other critics say is one reason they are failing.

“They’re not testing for what appears to be the real vulnerability of the ET-Plus, which is a low-angled impact,” he said.

Kane said the guardrails appear to have failed one of the final tests, based on comments by observers and federal and state officials. The tests were conducted from Dec. 16 through Jan. 27 at a private Texas facility.

At least 39 severe or fatal crashes involving ET-Plus guardrails — including a 2011 accident in which a Massachusetts woman lost her leg — “would likely have resulted in far less severe consequences had the energy absorbing end terminal performed as intended,” Kane said.

In October, a Texas jury determined that Trinity Highway Products defrauded the federal government by concealing design changes to the end terminals of its ET-Plus guardrails. The changes are alleged to have caused the systems to malfunction.

The jury ordered Trinity to pay $175 million in damages — an award that will be tripled under federal whistleblower laws to $525 million. Trinity appealed the verdict, the outcome of which is pending.

Following the verdict, federal officials ordered tests of the guardrails, which got underway in December.

Conducted by the Southwest Research Institute at a facility in San Antonio, the tests involved eight crashes where vehicles were driven into the guardrails at 62 mph.

The guardrails passed the first four tests, said Highway Administration spokesman Neil Gaffney. Results of the other four are still being analyzed.

Separately, a task force is reviewing the product’s modifications and other potential vulnerabilities, which could result in additional testing, Gaffney said.

The government reviews safety data and certifies guardrails as eligible for federal reimbursement, but states ultimately decide which products to use. The end terminals cost between $1,800 to $2,300 a piece.

A spokesperson for the Massachusetts Highway Department didn’t return a call seeking comment.