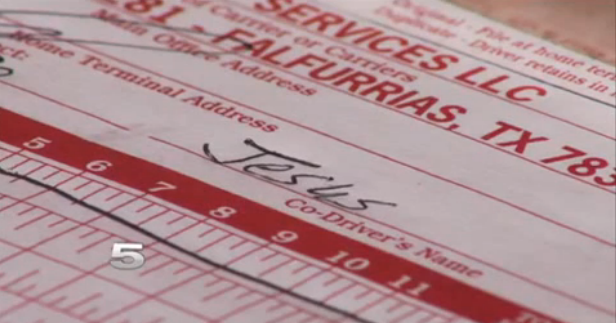 Jesus can’t take the wheel in Texas, at least not legally.

That was Ramiro Olivarez’ takeaway from the letter of termination he received from On Point Services LLC, the trucking company he worked for until recently being fired for “submitting incomplete documentation and falsifying legal documents.”

The veteran truck driver from Rio Grande Valley, Texas regularly wrote “Jesus” in the blank of his driver logbooks reserved for the name of his truck’s co-driver. Because he insists that’s who his co-driver is—or was.

No, Jesus didn’t sign his own name, but Olivarez said the only signature required in the logbooks every trucker in the U.S. has to keep is the driver’s.

“Driver’s full signature and then just a co-driver name,” Olivarez told KRGV. “It says nothing about a signature just a name.”

Though his former employer has yet to comment publicly on his termination, Olivarez believes their motives had less to do with paper work than with persecution.

“Jesus is my co-driver, and I have no shame in that,” he said.

Olivarez told KRGV he likely would have complied—or perhaps simply drawn a cross—had anyone at the company ever asked him to stop naming “Jesus” as a co-driver.

Since they opted instead to fire him, he’s now asking his fellow Christian truckers to follow his example as a point of principle.

“I strongly encourage you to put Jesus as your co-driver,” he said. “Let’s make a stand.”