VIDEO: Man dons cougar suit to propose to girlfriend in front of her 7th grade class 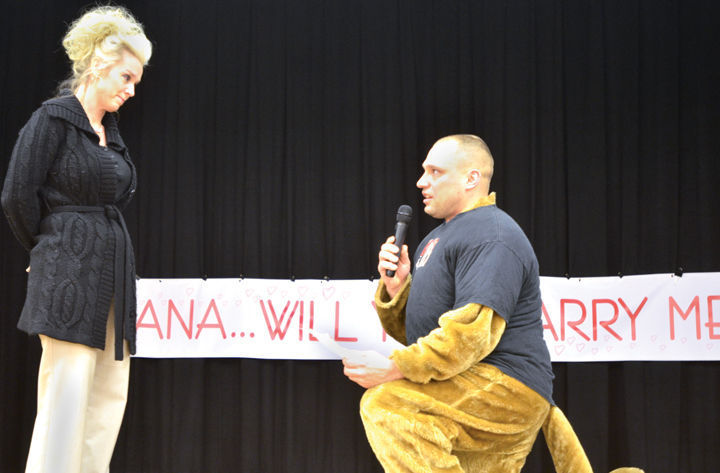 John Mitchell Jr., Osborne’s boyfriend of more than three years, made an unexpected appearance during the presentation to ask her an important question. Though Osborne’s appreciation plaque was a ruse, the engagement ring she accepted in front of a cafeteria full of squealing teens was real.

Osborne, who has taught at Geneva for nearly 20 years, was invited on stage under the pretense that she’d be accepting a teacher appreciation award from local radio station 93.7 Cougar, according to the Ashtabula (Ohio) Star Beacon. Mitchell was masquerading in plain sight in the station’s cougar mascot suit, even posing for pictures with the perplexed Osborne.

Then 93.7 morning show host Jeremy James, promising one further surprise for Osborne, queued up Train’s “Marry Me” on the PA. The curtains pulled back to reveal an unmasked Mitchell, in front of a paper banner that read: “Diana … Will you marry me?”

“As soon as the song started playing, I knew what it was about,” said Osborne, who teared up when Mitchell appeared and got down on one knee. “He used to sing that to me early on (in the relationship.)”

The couple met on Facebook more than three years ago.

“He sent me a friend request,” said Osborne, who has taught both of Mitchell’s daughters. “Then we just started talking like that.”

“She accepted,” said a grinning Mitchell, who’d plotted his proposal for a month with James, who is a friend.

“I almost didn’t come down (to the assembly),” Osborne said. “I was trying to stay in my room and get some work done.

“I had no clues — nothing,” she added. “I was nervous enough just to get the award and have to talk in front of my kids on the spot.”

“They were all into it,” he said. “There were a few band kids that had “YES” signs that they were supposed to hold them up.”

Seventh-grader Cole Vennis said it was a pretty cool way to frame a proposal.

Seventh-grader Daniel Wilms also said it was cool but wasn’t sure if that’s how he’d propose.

Both Weaver and Wilms, who have classes with Osborne, said she is “nice” and deserving of the special surprise.

The new fiancés, who’d planned to marry by 2017 and had already picked and fitted the ring, had already registered for a bridal fair. They said they have modest Valentine’s Day plans — dinner and a movie, nothing fancy.

“Just enjoying each other,” Mitchell said.

“This is fancy enough. This is Valentine’s Day in advance,” Osborne said.