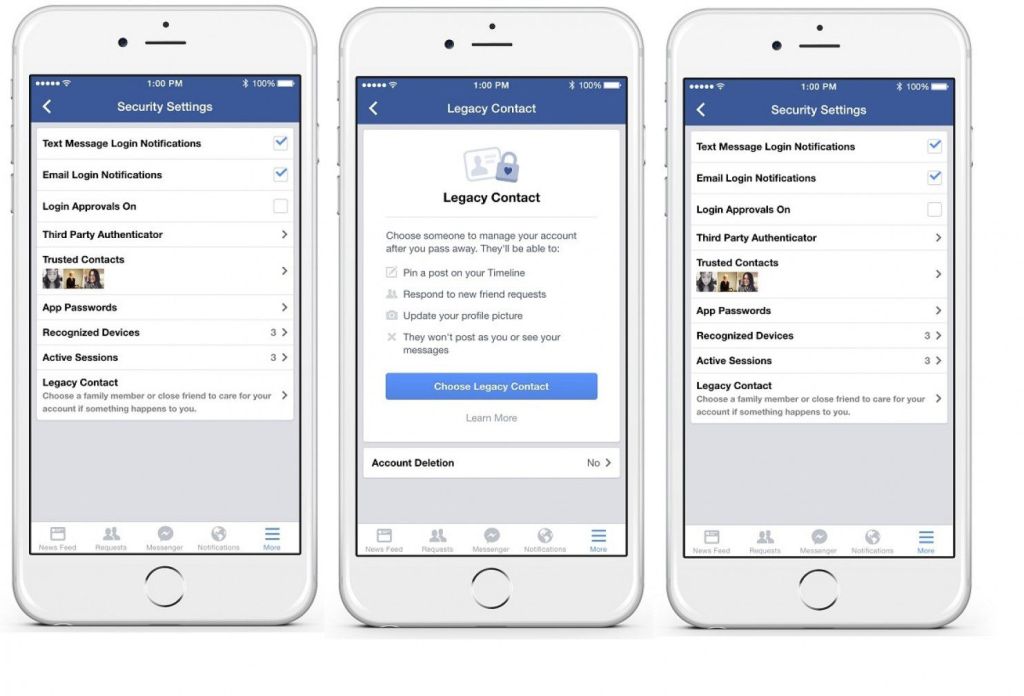 Facebook has announced that it will grant users more control over what happens to their Facebook pages after they die. Starting Thursday, users should see a new option pop up in their security settings that will let them choose whether they want to pass their information and account management over to someone else when the time comes.

This is not something that people like to talk about. But the truth is that what happens to your data after death is as big a question now as what happens to your physical property. Just think of all the information you store online, or communicate in e-mail. Google already offers a similar tool to let you decide what to do with the trove of e-mail and other data it has on its users. Yahoo Japan has a full-fledged service to let people know about your death and handle all of your data management.

Facebook is a bit of a different animal, however, since it’s social by design. The site was originally designed for college students by a college student. It’s probably safe to say that handling the profiles of the dead wasn’t a consideration Facebook chief executive Mark Zuckerberg gave much thought to in his Harvard dorm room. So Facebook has had to evolve a response over time — Facebook pages are often a place where friends and family congregate to grieve. The company already offers the option for people to report the death of a Facebook user, which “memorializes” the account and basically freezes it. You can’t change anything posted, change the audience for any postings or even log in to the account.

But that wasn’t enough for a lot of Facebook users, said Vanessa Callison-Burch, a Facebook product manager. “There were a lot of asks about features we could add,” she said. “People wanted the ability to respond to new friend requests, and do more with the account going forward.”

After a year of working on the project, Facebook is implementing some changes based on feedback it’s gotten from users. As of Thursday, there will be three basic options:

_You can do nothing, in which case the current rules apply and your account can be memorialized by anyone after your death, providing that the company gets adequate proof of your death.

_You can designate someone — called your legacy contact — to manage your account. Once Facebook is notified of your death, your timeline will also change to let people know you’ve died. Facebook does this by adding the word “Remembering” ahead of your name — i.e. “Remembering John Doe.”

The legacy contact must be a Facebook user and will be able to do specific things, such as accept requests from those who want to befriend an account to do things such as post messages on a user’s timeline. Contacts will also be able to pin posts to the top of a profile page and change the late person’s profile picture or cover photo. To keep from unduly upsetting a deceased Facebook users’ friends, these types of notifications will be suppressed — meaning you shouldn’t see them pop up on your own timeline, alongside normal profile updates.

Messages, however, aren’t included in this archival data, since you can’t grant sharing permission for the person on the other side of the conversation. Unfortunately, that’s the same reason that pages that are currently memorialized won’t be able to access these new features — there’s just no way to get that retroactive permission, she said.

When you pick a legacy contact, you can choose whether to notify them at that time or not. You can also change your legacy contact at any time — and he or she won’t be notified of that change — just in case your circumstances change.

Facebook is going to continue working on ways to make this painful process a little smoother over time. Callison-Burch said her team thinks of this as the first version of this tool, including just the most-requested features that it’s heard from users.

The legacy contact option will come to the United States first. Users who designate a legacy contact will be reminded each year about their decision, in case they want to make any changes. Facebook plans to bring the feature to other countries, but is taking its time to make sure that it responds with care to each country’s attitudes toward death.