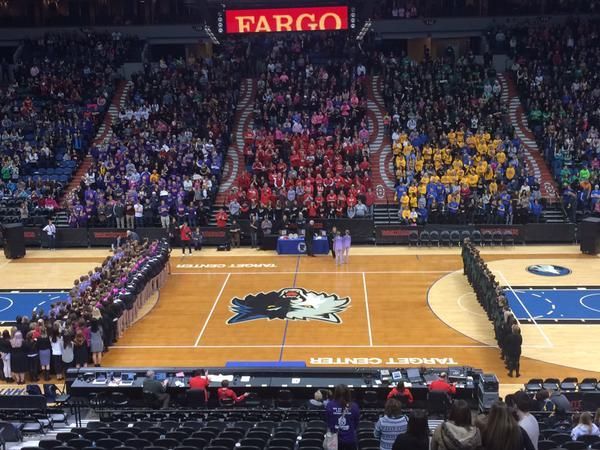 A Minnesota High School cheer team has found itself mired in a real life controversy that reads like a bad teenage movie plot à la Bring It On.

Saturday, the Faribault Emeralds won the 3A state high school high kick championship at the Target Center in Minnesota. But when the Emeralds went to center court to get their first-place medals, they were alone.

According to the Star Tribune, fellow contenders Wayzata, Eastview, Chaska, Lakeville South, and Eden Prairie refused to be part of the ceremony and would not accept their runner-up medals. Why? Because they believe Faribault used a stolen routine to win the title.

In fact, the five teams wouldn’t even stand on the same side of the court as the Emeralds. Even after the public address announcer asked them to join the champions, they stood together holding hands in silence.

“We won it fair and square,” Faribault head coach Lois Krinke told the Faribault Daily News. “We were in first place after the preliminary round almost unanimously, and unanimously in the final round. We’re excited, the girls are really excited. We’re the top team in the state and if they didn’t want their second and third-place medals, I couldn’t care less. We got the first-place medal.”

The allegation is that Faribault plagiarized a routine performed last year by the drill team from Utah’s Copper Hills High.

When the Emeralds performed the routine at the Minnesota sectional tournaments last week, teams took notice of they felt were similarities between the two routines and complained to the Minnesota State High School League. The governing body found no wrong doing.

Now the protestors (Wayzata, Eastview, Chaska, Lakeville South and Eden Prairie) are being investigated by the MSHSL for their behavior at the state tournament.

You can read the MSHSL’s official statement here.