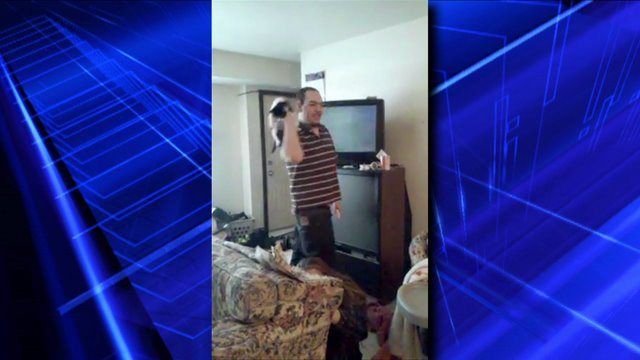 ASHTABULA, Ohio — An Ohio man has been charged with cruelty to animals after posting a video on social media of him tossing cats around while baby sitting.

The video was posted at 3 p.m. Monday to Kaine Fowler’s Facebook page and within an hour the Ashtabula Police Department received several calls about the video. Fowler was shown in the video throwing the cats to Melissa M. Candela of Ashtabula while two children watched.

Police seized the cats when they accompanied the city dog warden on a welfare check at apartment shown in the video. When officers arrived, the tenant said he was the father of the children in the video.

“The father acknowledged that Fowler and Candela had babysat the children and, upon learning what occurred, he asked them to leave and not return,” City Solicitor Michael Franklin said.

Fowler and Candela have each been charged with two counts of cruelty to companion animals, first-degree misdemeanors, punishable by up to six months in jail and up to a $1,000 fine.

An arraignment is scheduled for Feb. 25 in Municipal Court.

The cats are now in foster care through the Ashtabula Country Animal Protection League.

Franklin said, based on statements made by Fowler to NewsNet 5, additional charges of endangering children could be filed.  Fowler said he was “drunk” and “high” while babysitting the children.

Fowler said he’s received threats because of what was “supposed to be this harmless video.”

“It was ignorant, stupid, foolish. I regret it, shouldn’t have done it, I feel bad for the animals you know because I like animals,” Fowler said.

According to Municipal Court records, in the past year Fowler has been convicted of theft, telephone harassment, petty theft, domestic violence, failure to control (a vehicle) and driving without an operator’s license.

Candela has a traffic case pending for driving without an operator’s license, Municipal Court records show.