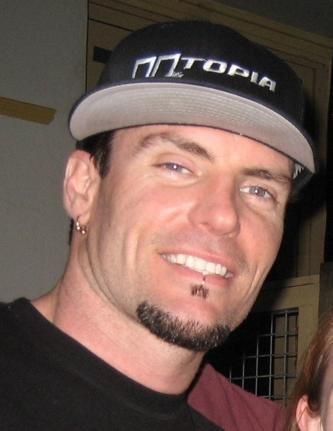 According to a statement from the Lantana Police Department, several household items – furniture, a pool heater, bicycles – were stolen from a Palm Beach County residence in foreclosure. (Apparently a vacant one; the police date the burglary occurring sometime between December 2014 and this month.) Police got a search warrant and found several of the stolen items in a home nearby, which is being renovated by Van Winkle.

“During the investigation, it was determined Robert Matthew Van Winkle played a role in the burglary and theft,” the release stated. Van Winkle was taken into custody, where he was charged with burglary residence and grand theft.

TMZ, which first reported the arrest, says that the incident allegedly involves a house being renovated for Van Winkle’s reality show, “The Vanilla Ice Project.” The series, which has been a hit for DIY Network, features the rapper fixing up houses around his own home in Palm Beach County, where he’s lived for years.

If you haven’t kept tabs on the rapper’s reality TV career after his “Ice Ice Baby” stardom in 1990, Van Winkle has found a comfortable niche in cable TV. The show, scheduled to debut its fifth season this year, started in 2010 after DIY Network executives were pitched a show about the rapper’s little-known passion for renovating and flipping houses. Its success prompted a spin-off, “Vanilla Ice Goes Amish,” set in Pennsylvania Dutch country.

A representative for DIY Network did not answer questions about whether the house in question is involved with the show. “DIY Network has been made aware of this situation and is currently looking into the matter,” the rep said.

Meanwhile, the Palm Beach Post said Van Winkle is a very well-known figure in the South Florida community, and frequently participates in local events and charities.