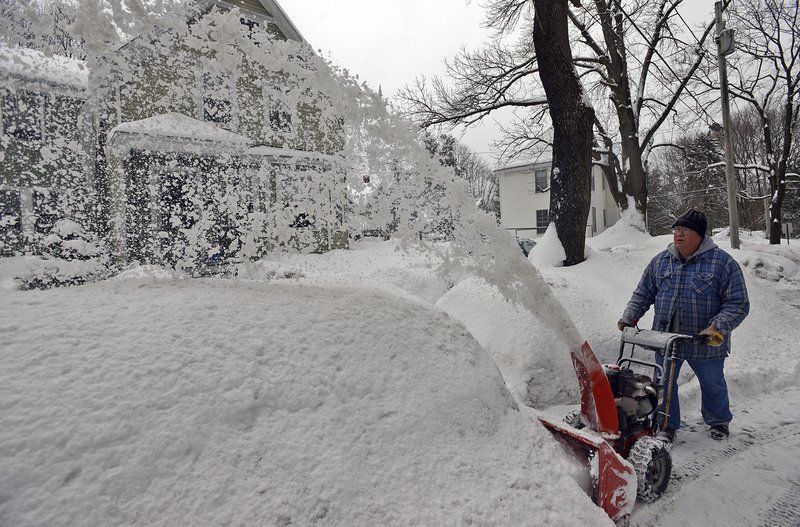 BOSTON – The latest menace dealt by New England’s historic snowbound winter – the creak, crack and boom of collapsing roofs – may get worse as the region heads into a weekend forecast of rain.

Rooftops, especially flat ones, have buckled under the weight of snow from Rhode Island northward to Maine. In Massachusetts, 106 roofs have caved in the last two weeks. Two partial roof collapses in Portsmouth, New Hampshire, displaced as many as 700 residents in an apartment complex.

There have been no reports of death or serious injury in the structural failures. That could change with Boston’s next round of foul weather, which will start Saturday. Unlike every system since Jan. 27, it will switch to all rain through the overnight hours, said Alan Dunham, a National Weather Service meteorologist in Taunton, Massachusetts.

“The snow will basically just absorb all the rain,” Dunham said. “All that snow sitting on roofs will be even heavier and it will exacerbate an already large problem.”

Roof collapses in Massachusetts include a commercial plaza, daycare center and lumber retailer, according to the state’s emergency management agency, MEMA.

In Newington, New Hampshire, about 100 employees face a temporary layoff after a roof collapse on a warehouse at Georgia-Pacific.

A barn roof gave way in Berwick, Maine, as did part of a roof over a manufacturing facility in Rockland, the coastal Maine community known for its annual lobster festival.

In the Boston area, which has been smothered by more than eight feet of snow this season, companies that shovel off roofs and break up ice dams are so busy that many aren’t returning new calls for help.

As of Thursday afternoon, Boston had received 98.7 inches (about 250 centimeters) at Logan International Airport, making the current winter the snowiest on record behind 1995-1996, when 107.6 inches fell.

Whether Saturday’s storm system brings snow, rain or a mix, it will add weight, said Chris Besse, a MEMA spokesman.

“That’s why we’re encouraging people to get out there and check their roofs,” he said in a telephone interview.

Signs of impending collapse can include sagging roofs, leaks inside the house and cracked or split wood in the structural makeup of the dwelling, MEMA said on its website. Sprinkler heads that drop down from ceiling tiles, doors that pop open and doors or windows that are difficult to open can also be red flags.

To ease the roof’s load, the state recommends a snow rake – if you can find one for sale. Start from the edge and work inward, shaving the piles down to two or three inches. Scraping the roof clean will risk damage to shingles and other roofing material, MEMA advises.

Also, remove large icicles carefully if they’re hanging over doorways and walkways and knock down higher-hanging icicles with a broom stick.

Ladders should be avoided since ice tends to build up on the rungs as well as the soles of shoes. The same goes for electric heating devices like hair dryers or heat guns, MEMA says.