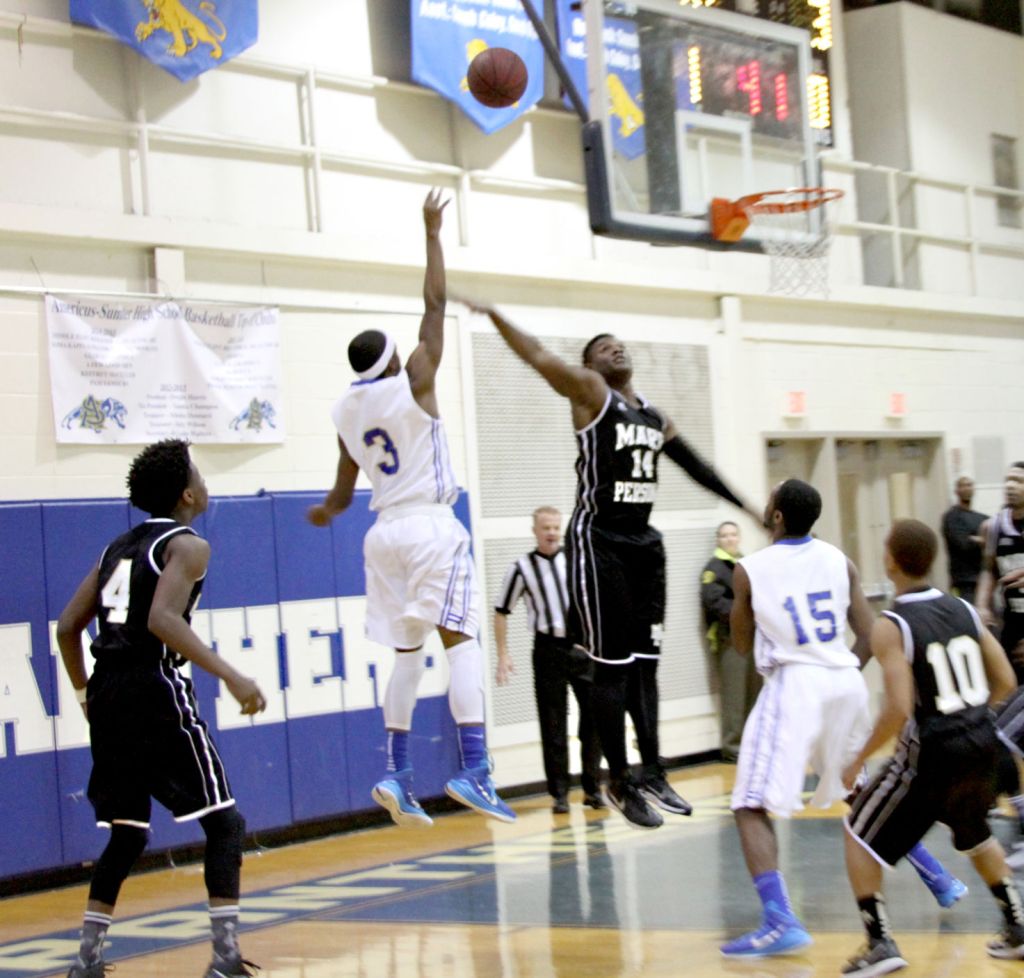 AMERICUS – Less than a week after a heartbreaking defeat at the hands of the Albany High School Indians on Feb. 13 for the region 1-AAAA championship title, the Americus-Sumter Panthers took aim at an even larger prize; the State Championship. With a 25-5 season and a second-place finish in the region, the Panthers earned a spot in the state AAAA tournament that began on Feb. 18.

For their first match of the tourney, the Panthers hosted the Mary Persons High School Bulldogs in Americus, dealing a crushing 78-46 defeat to the visiting team. With the win, the Panthers earned a spot in the sweet 16, facing the number-one seeded Cartersville Hurricanes on Feb. 21 in Cartersville.

Each of the Panthers’ starters, Adam King, Daylon Leary, Eric Davis, DJ Harris, and Juwan High delivered impressive performances in the first round of the state tournament. Many other players, such as Mekall Yancie, Kiante Sims, and Frederick Bryant came off the bench to help shut down their opponents in a match that showcased nearly every player on the Panthers’ roster.

Harris and King both proved to be nearly unstoppable when driving the lane, while Yancie showed the Panthers’ opponents no mercy when it came to rebounds. Sims’ quick hands gave the Bulldogs trouble throughout the game and Bryant proved that his shots can find their mark from nearly any position on the court. Davis’, Leary’s, and High’s quick feet and ball-handling skills were integral to the Panthers’ success on the court.

Leary jumped for the tip-off and Mary Persons received first possession in the Feb. 18 contest. Thirty seconds in, Leary attempted to open the scoring for the Panthers with a steal, but his errant shot popped off the rim and was rebounded by Harris. Harris promptly tossed the ball back to Leary behind the arc so he could drain a three-pointer. One minute later, Leary assisted King in a lay-up and the Bulldogs responded with a three-pointer of their own. Harris continued the action from long distance, nailing a trey at the 5:20 mark and King brought the Panthers’ total to 10 with a Davis-assisted lane shot to cap off a 5-0 run for the Panthers.

Mary Persons broke their silence with a pair of three-pointers to bring them within one at the 3:00 mark. In the final minute of the frame, Harris assisted Sims in an off-the-bench bucket before the Bulldogs tied the score 12-12 with another trey. Harris quickly proceeded to drain a perimeter shot before Yancie came off the bench to delight the crowd with a spectacular dunk at the buzzer. Americus-Sumter took a 16-12 lead into the second stanza.

Still riding the wave of excitement of Yancie’s powerful display, Sims sent the crowd into an uproar 20 seconds into the second quarter with another slam dunk. ASCHS fans went wild, stomping on the bleachers and creating a deafening roar through the gymnasium.

When the dust finally settled, the Panthers proceeded to up the ante with a pair of free throws by High. Mary Persons responded with a trio from the charity stripe as the Panthers began to steadily pad their lead with a series of steals, three-pointers, and fast breaks that kept the crowd riled up through the end of the half. Americus-Sumter took a 43-28 lead into the locker room at the break.

A little rest seemed to do Mary Persons’ shooters some good as they began to heat up after half-time. The Bulldogs posted 16 points in the third frame, but could not manage to prevent the Panthers from scoring 14 of their own. King opened the quarter with a pair of lay-ups before High converted a rebound into a bucket halfway through the frame. Sims added another basket, putting up his own rebound to give the Panthers 51 points. Harris immediately two more points to the Panthers’ lead. With two minutes left in the quarter, High nailed a pair of lay-ups to cap the Panthers’ total at 57 heading into the fourth. Mary Persons entered the final frame staring down a 44-57 deficit.

Try as they may, the Bulldogs would not have the opportunity to gain any ground in the fourth as the Panthers would begin a 21-2 run sparked by a Frederick Bryant three-pointer 45 seconds in. The Panthers would ride this momentum until the final buzzer, putting 24 points on the board while giving up only five.

Harris led the team’s scorers, posting 16 points. Harris also contributed five rebounds and two assists. King followed closely with 15 points, adding five rebounds to his stats. High joined them in the double figures with 10 points and three rebounds. Yancie won the battle of the boards with nine rebounds. Yancie also contributed seven points, one steal, and one block to the team’s victory. Sims added eight points, four rebounds, one block, and two steals while Bryant drained three from beyond the arc.

With their next match right around the corner, the Panthers will continue honing their skills as the contests get increasingly more competitive. With a win in Cartersville on Feb. 21, the Panthers will move on to the elite eight round of the tourney to be held on Feb. 24-25.