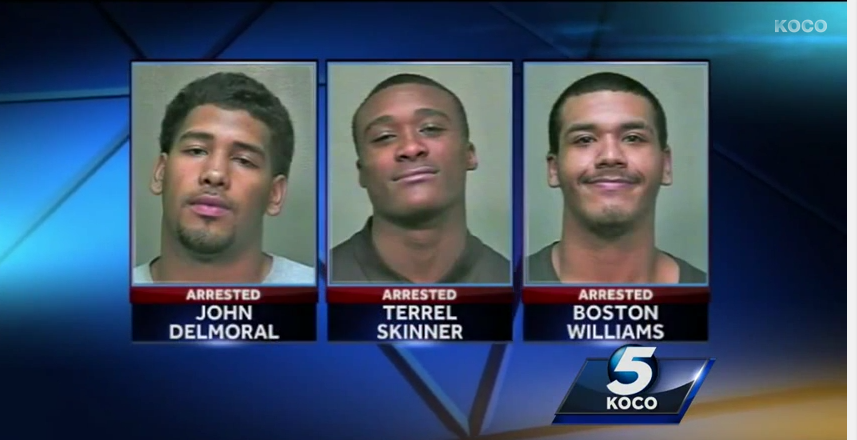 OKLAHOMA CITY — Four students at an Oklahoma City high school were charged with rape Thursday following allegations made by a fellow student.

Three of the teens were arrested Wednesday on campus while the fourth was taken into custody away from the high school.

Westmoore High School students Terrel Skinner, 18, John Delmoral, 18 and Boston Williams, 19, were all charged with second-degree rape. Johnathan Henderson, 18, was charged with rape by instrumentation in a separate incident.

“The investigation started after Westmoore High administrators received information from another student that the victim had been involved in a situation where her safety was a concern,” Horsetkoetter said. “The administrators immediately notified the victim’s parents and they called the police. The report made by the parents generated the investigation and subsequently led to the arrest of the three students on campus yesterday. The incidents that were investigated occurred off of school property.”

According to the affidavit, the victim and the four suspects went to the Brookwood Apartment Complex on Jan. 26. The victim stated she was intending to have consensual sex with Henderson.

While the victim and Henderson were having sex, two of the other suspects entered the room undressed. They told Henderson “get up, it’s our turn,” the affidavit said. According to victim, they then took turns raping her.

The affidavit states the victim said she was shocked to see Henderson get up and allow the other two to rape her.

Then the third suspect entered the room and according to the affidavit, he raped the victim also. The victim said she was also forced to perform oral sex on several of the suspects while being raped.

According to the victim, on Feb. 9, she was assaulted by Henderson again. The affidavit said he lured her into a classroom at Westmoore to help him look for his phone. When she bent over to search through the couches, the affidavit states Henderson reached under her skirt and assaulted her.

The incident was caught on surveillance video, records show. Henderson also allegedly sent a text message to the victim following the incident confirming what he had done, the affidavit said.

Skinner and Delmoral are both members of the Westmoore football team. Henderson has been kicked out of school, the affidavit shows.

“We are proud of the students who came forward with the information regarding their classmate’s well-being and are equally as proud of our administrators for taking care of the incident in such a timely manner to make sure the victim was kept safe,” Horsetkoetter said.