Is basketball court-storming a broken tradition? 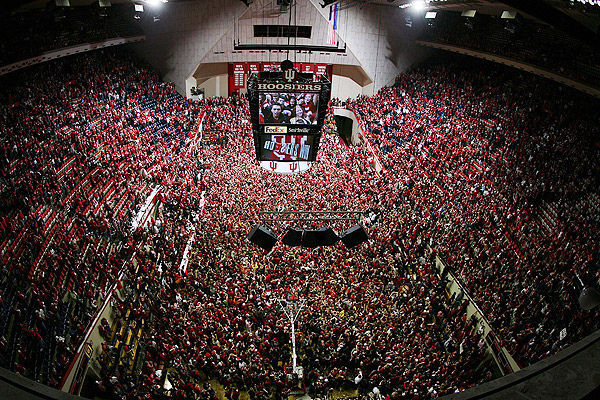 Court storming is a time-honored tradition in college basketball. The practice of home teams running onto the court after a huge victory goes back several decades, if not more.

However, recently, some school administrators, coaches and media personalities have called for an end to court storming. That includes Kansas coach Bill Self, who witnessed first hand the latest incident Monday night when his eighth-ranked Jayhawks were upset 70-63 by rival Kansas State in Manhattan, Kansas.

As soon as the final buzzer sounded, hundreds of fans clad in purple rushed the court to celebrate with the WildCats. It happened so quickly, Self and his players were caught in the middle of the throng, struggling to get off the court.

Even though no one was hurt, Self wants to see changes to the court-storming practice before someone does get injured.

“I wasn’t nervous for me,” Self said in the post game press conference. “There were several students that hit our players — not saying like with fists, but when you storm the court, you run in, you bump everybody, stuff like that. This has got to stop. Court storming is fine, but surely, you can get security to the point where player safety is not involved like it is over here. The last several times they’ve won, they’ve stormed the court on us. That’s disappointing that that happened again, but we also allowed it to happen again by not playing well.”

Conferences like the SEC have already banned court-storming. They remains the only conference in college basketball with a tiered fining system in place for its schools that break rules against court storming.

“Access to competition areas shall be limited to participating student-athletes, coaches, officials, support personnel and properly-credentialed individuals at all times,” the SEC policy states. “For the safety of participants and spectators alike, at no time before, during or after a contest shall spectators be permitted to enter the competition area. It is the responsibility of each member institution to implement procedures to ensure compliance with this policy.”

Yet, not everyone believes banning court-storming is needed. ESPN’s Andy Katz put the blame on security.

“Big 12 should fine Kansas State for its lack of security during the court storming,” Katz tweeted after the game. “The No. 1 objective is get opposing team off safely. Big 12 commish Bob Bowlsby needs to act (Tuesday). This isn’t about being the No Fun Police. This has been and always will be about safety first.”

“K-State prides itself on providing a great game atmosphere in a safe environment and did successfully execute our security plan when we defeated KU last year in Bramlage as well as in 2011,” Currie said in a statement. “Although no one was hurt last night, we fell short of our expectations for securing the court and escorting KU to its locker room without incident. We are disappointed that we did not do better for the KU team.”

However, the players and fans on the winning side of a court storming have a different point of view. When Minnesota beat No. 1 Indiana in 2013, Rodney Williams described the moment as if it was an out of body experience.

“Growing up, watching these college games, you see it all the time,” Williams told Fox Sports. “You want that to be you. It took four years, but that finally was me. And I said, ‘That’s going to be a moment I’m going to remember for the rest of my life.’”