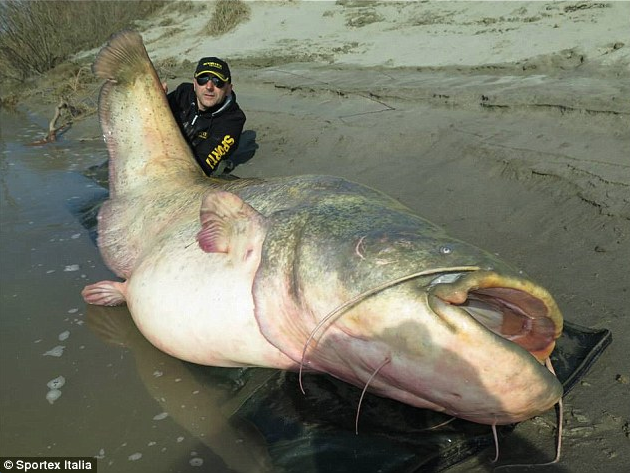 1. No, that’s not a marine biologist rescuing a beached whale. It’s Italian Dino Ferrari posing with a 9 foot-long, 266-pound catfish, caught last week in Po Delta, Italy–not with Photoshop, but with an old fashioned rod and reel.

You can read more about the beast here.

2. A home in Stafford, N.J. was completely destroyed Tuesday morning in a spectacular explosion caused by a natural gas leak. A police cruiser dashcam recorded video of the intense blast.

No one was inside the home at the time, but 15 people in the surrounding area were injured. Most were utility workers who had responded to reports of a gas smell so strong that 75 people had already been evacuated from the neighborhood.

An investigator on the scene told reporters the blast “felt like a bomb.” It looked like one, too.

3. It’s all the rave in Australia–kind of literally. The inspiration for the glow-in-the-dark ice cream a Melbourne ice cream parlor recently began scooping up for customers came from the owner’s days as a “dance party child in the 1990s.”

The DayGlo dessert’s gimmick is powered by a UV-reactive liquid food coloring, which Australia’s version of the FDA says is safe for human consumption, even  for non-ravers.

The ice cream comes in three flavors: raspberry, pine-lime and mango passion fruit. At $8.50 a serving, it’s as pricy as it is pretty.